The Best and Worst Drinks Around the World

One thing that travelling to nearly 50 countries has taught me is that the entire world likes to get drunk. To get drunk, you need to have a drink that will get you drunk. Whilst some places are known for their fine beers and wines, other take a more rudimentary approach and brew their own spirits.

Below are a list of some of the best (and worst) alcoholic drinks I have tried around the world.

Soju is by far my favourite and a cultural institution in South Korea. Walk into any convenience store and there will be small green bottles with pictures of fruit wrapped around the front of them. This is the sweet nectar of soju.

Traditionally made of grains such as rice or wheat, the flavoured versions are now much more popular to take away the burning taste of alcohol. The drink are normally around 20% ABV, a lot less than typical spirits, but can go up to 50% for premium varieties.

The sweet and fruity flavour means it can go down rather quickly as it is drunk neat. But not to worry as when you finish there are plenty more flavours to try.

I also tried a plain version of soju in North Korea, so I highly recommend the commercialised versions in South Korea if you’re after taste!

A close cousin of Soju, Sake is the rice wine native to Japan. It will be served during karaoke, and sometimes with a Japanese beer, but is consumed during many celebrations in Japanese culture.

Dating back over a thousand years the recipe has remained fairly stable and gives a 20% ABV. Unlike Soju, sake lacks flavour but a high quality one is still nice as it warms your throat. It is also easier to find in western countries if you’re looking to try some without the air fare.

Baijiu is Chinas version of rice wine. Normally around 40% and made from sorghum or rice, it is relatively flavourless except from the strong taste of alcohol. Unlike sake and soju, this os regularly mixed to dilute the strength and flavour.

This would go very high up on my list of favourite spirits. Laolao is the national drink of, and only found in, Laos and is a strong, clear spirit. Often homemade, the alcohol percentage can vary massively. It’s taste is a bit sweeter than others on this list with the flavour lingering in your mouth a bit longer than usual. I would highly recommend trying it if you ever find some.

Whilst not strictly an alcoholic drink, Kava has a similar effect on the body as alcohol.

The kava root is found across the South Pacific where it is left to dry in the sun, pounded into a powder and added to water. Each bowl is homemade and tastes different depending on the quality and cleanliness of the root and water.

Kava as a drink looks and smells like muddy water, and it doesn’t taste too much better. Kava is traditionally drunk as part of a kava ceremony, where a coconut shell is filled with kava and passed around the circle with clapping and chanting. Although it isn’t alcohol, the drug in kava gives you a feeling of light headedness and being relaxed. I think this explains Fiji Time, where stuff will happen, just… eventually. 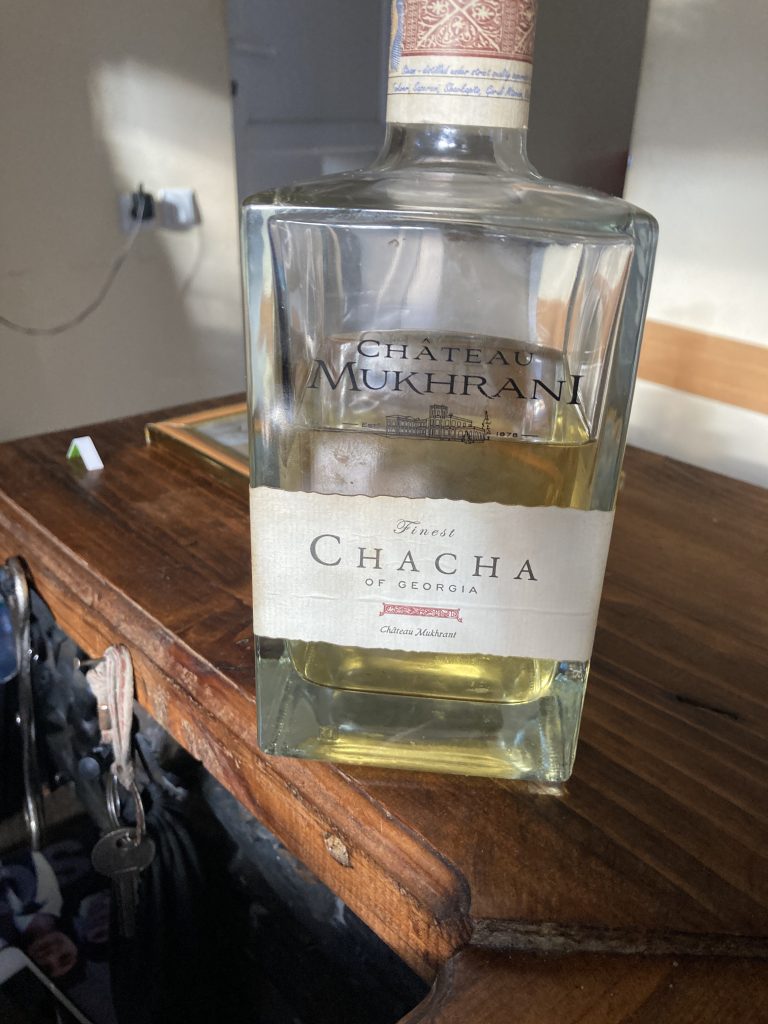 Chacha is the fermented remains of grapes that have been left over from the wine making process. It has a stragne flavour, almost like plastercine, but isn’t repulsive. It is often home brewed and the first few I tried all came from plastic bottles with no label on. The one in the photo above came in a legitimate looking bottle but was given to me at 8.00am before I was about to hike up to Gelati Monastery to “give me strength” as the old guy told me.

Bia Hoi is the cheapest alcoholic drink I have ever had. I once had one for £0.08. Yep, eight pence!

It is a home brewed beer that is everywhere in Vietnam. Each bar and restaurant will have their own brand of Bia Hoi alongside the well known names on tap. It generally tastes like a mild lager, but being homebrew, each has its own take on it. I remember one being incredibly fizzy! It would be a nightly tradition in Vietnam to find street food or a small restaurant with plastic chairs and order a Pho and a Bia Hoi for no more than £2.

Porto in northern Portugal is the birthplace of port, a dark sweet dessert wine. It is a lot heavier than a normal wine and sometimes a bit stronger, but the sweetness takes away any of the alcoholic flavour.

I know that rum is traditionally made in the Caribbean, but most of the rum I have had has been elsewhere! One of my favourites rums I have had on the road is Old Monk which I found in India. On many long nights in the Himalayas, a lot of Old Monk was consumed. It had a sweetness that meant it wasn’t too strong, but that meant it went down far too easily.

One of the ones I don’t like, but is almost a national drink, is Bundaberg Rum. Bundaberg, in the north of Queensland, Australia, is a popular sugar growing region which gave rise to the rum factory opening in the late 1800’s. The sugar producers had to get rid of the mollasses somehow, so rum was it. However, it was probably one of my least favourite drinks in Australia, even though almost every bar sold it. I found it quite dry and woody.

When I was travelling the east coast of Australia, I stopped off a the Bundaberg Rum distillery for a tour and samples. The samples of the small batch and premium rums were delicious and I can highly recommend going on the tour to try those.

But as for the regular yellow Bundy?

That can happily stay in Australia.

Almost every country has a national or local beer and a lot more have a spirit that is ubiquitous to that place as well. As you can see, they range from excellent to awful with everything in between. What has been the best and worst drink that you’ve had whilst travelling? Do you go for the local poison or stay with the bottled water when travelling? Let me know in the comments below or on social media.