Kiev is a small but busy bustling city and the capital Ukraine. Trying to emerge from its Soviet past, it has a rich mix of old and new. It’s a city thats modernising all the time with high rise apartment blocks rising up from the drab Soviet styles they’er replacing. It keeps its eastern European charm with a promising future. It’s a destination that is getting more popular every year, especially when cheap flights from other European capitals resume without restrictions. Below are the best things to do in Kiev:

This has got to be one of the best sites in Kiev. A UNESCO World Heritage site, St Sophia’s Cathedral is over 1000 years old and continues to amaze. It is named after the Hagia Sophia in Istanbul.

Cost: 125₴ ₴ if you would like to go into the Bell Tower and all the extra rooms

Part of the same UNESCO World Heritage site as St Sophia’s Cathedral, the Pechersk Lavra are a set of caves with the mummified remains of the monks inside them. You can tour around the

Even if you aren’t interested in the church itself, take the opportunity to climb the Bell Tower for stunning views over Kiev.

Independence Square, or Maidan Nezalezhnosti, has been the sight of various revolutions, protests and political rallies over the years. In 2004 the Orange Revolution started here before sweeping across the country, and in 2013 the Euromaidan protests, demanding closer ties with the EU instead of Russia, began. Today, it is still the sight of smaller political protests, but the relative stability in Ukraine has meant it is now a meeting place of young people enjoying the fountains, architecture and street performers. Underneath the square is a large underground shopping centre and a metro station making it easily accessible wherever you are staying in Kiev.

I might be biased but going to watch sport should be on everyones list in every counrty! But the Olympic stadium in Kiev, which hosted the Euro 2012 and 2018 Champions League finals, is a seriously impressive stadium, close to the city centre. I was lucky enough to watch Ukraine v France in a World Cup qualifier that had an incredible atmosphere. Tickets were easy to get online up to the day before the match.

If you aren’t there when an international match is on, you have a good chance of catching a game as both Dynamo Kiev and Shakhtar Donetsk now play their home games at the 70,000 seater stadium.

5. Visit all the other churches

I’ll be the first to admit that churches do get boring. After seeing plenty on my travels around England, they don’t rate too highly on my list. I’ve also heard of foreigners, mostly Aussies and Kiwis coming to Europe and getting ABC syndrome (Anything But Churches/ Cathedrals syndrome) as every European city has one as their major landmark.

However, the ones in Kiev are unlike ones I’ve seen anywhere else in Europe. Built in the Eastern Orthodox style St. Volodymyr’s Cathedral, St. Andrew’s Church and the Church of Three Saints should all get a special mention and are worth checking out.

They are all within walking distance of each other and can all be seen in the space of an afternoon. 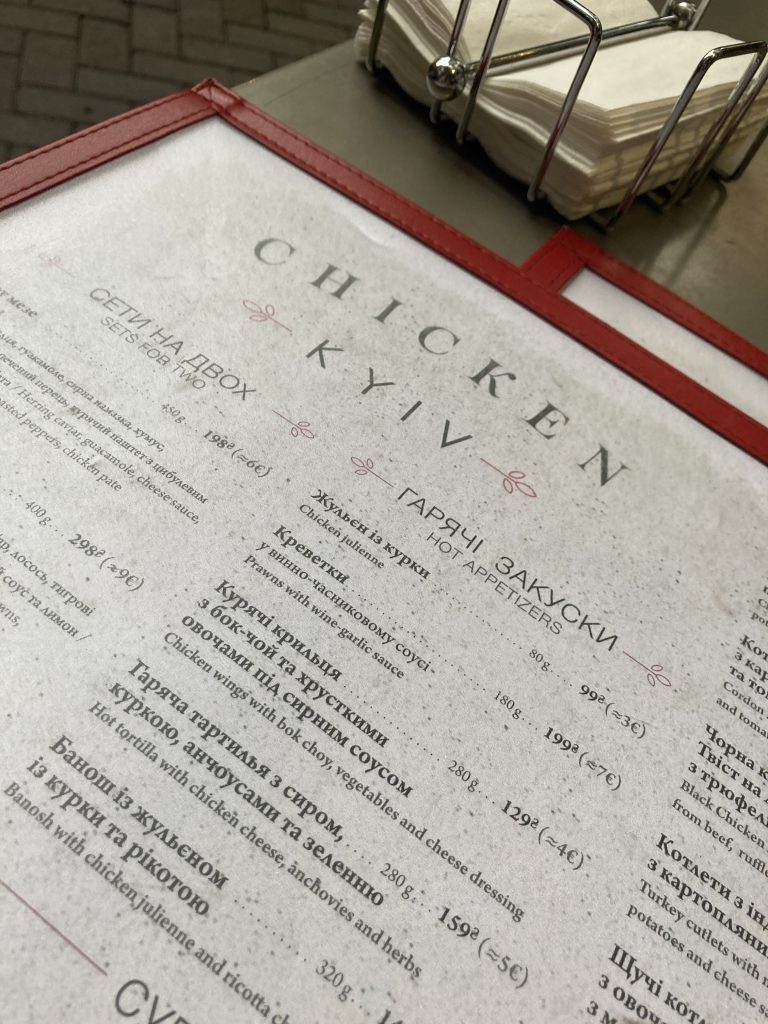 There are actually a variety of great restaurants in Kiev and more are popping up all the time. However, one dish you will associate with Kiev (especially if you’er English) is the chicken kiev, a chicken breast filled with a garlic sauce. A favourite oven meal in the UK, I’m glad to announce that in Kiev itself, the meal was a lot healthier. Unfortunately, it was so tasty that I finished it before being able to take a photo!

I found the restaurant, Chicken Kyiv a 5 minute walk from Independence Square where they have a variety of different types of chicken (and plenty of other dishes) available!

An imposing statue standing over all of Kiev, this Soviet monument it a site to behold! Standing 92m tall, it was actually one of the first things I saw of Kiev on my train from the airport to my accomodation.

I’m not joking here, there is a beach in Kiev. On the small island in the middle of the river there are plenty of small beaches that are popular with the locals. Take a metro to Hidropark and follow the loud music. There is a beach a 5 minute walk away if you turn right out the station. I went on a weekday afternoon in September and was the youngest person there by about 30 years. But even so, it was warm and pleasant to sit on the soft sand and relax. If you were to turn left out the station, past the bars and restaurants (more on these later), about 15 minutes later you’ll reach a beach. I stayed there as the sun set over the Pechersk Lavra and the Motherland Monument.

Coffee culture is booming in Kiev. On every street corner and park you will find small stalls popping up selling coffee and an assortment of snacks. There are also coffee shops abundantly dotted round the city. A popular chain is Lviv Croissants.

I normally drink a flat white and they were difficult to find, I normally had to settle for a latte or cappuccino. They were also very hit and miss. I had some very good coffee but also some shockers. Try as many as you can but keep your standards low to start.

10. Go to the deepest subway station in the world

Arsenalna, located on the red line, is the deepest metro station in the world at a depth of 105m. It’s not going to win any awards for beauty but if you want a random stat from your trip head here. Be warned, getting down the escalators can take over 5 mins. The Kiev locals aren’t ones to walk down escalators or stand to one side, as a Londoner it shocked me!

Cost: Each journey is 8₴

You May Also Like: Top 10 Crazy Things To Do In Ukraine

And the things to avoid…

I’m normally a big fan of botanic gardens. They are places of calm and peace in major cities. But not in Kiev. There were a couple of large parks around the city and none of them were that inviting. Pavements and paths were uneven and unkept. Grassy areas looked disheveled and worn. The plants and trees were overgrown and unappealing. If you want a nice places to relax, I’d recommend one of the smaller parks or the beach on a hot day.

I know I’ve already mentioned the beaches but that is the only reason to go to Hydropark. Leaving the station and turning right brings you to a short street of bars and restaurants that have seen better days. A boom box played music outside a corner store that sold mostly bottles of cheap vodka. Turn left out the station and it’s like you’re walking down the strip of Magaluf after it had been neglected for 20 years. It looked a desperate place with loud Europop and Russian dance beats competing with each other from the 4 or 5 bars that were open. With maybe 15 customers between them, it was a sad state of affairs.

Maybe in the peak of summer it is a booming hub of youth culture. But I doubt that somehow. If anyone has any more information on it, let me know!