I’d like to consider myself well travelled and that I know something about most countries. However, I knew very little about Moldova before I went. It is Europe’s least visited country with only a few 100,000 people visiting each year if you take off Romanians and Ukrainians visiting from the country next door. Pre Covid, less than 12,000 British nationals visited Moldova, less than the number that visited Belize, Fiji or Swaziland.

Due to the lack of tourists, there is very little information available about what to see and do on Moldova. If you’re looking for up to date information in a post Covid travel world, there is even less.

I managed to find one person on Instagram that had recently been there who helped me a lot but the blogs I read didn’t inspire confidence or even give me hope that there was even anything of note to do there. On one blog post I saw, the number 1 thing to do in Chisinau was to ride the bus. They must’ve been scrapping the bottom of the barrel.

But after 5 days in Moldova, I’ve actually found there to be plenty to do and see. It may be a bit harder than other countries but it doesn’t mean it can’t be found. Below are my top things to do in Moldova.

The Best Things To Do In Moldova 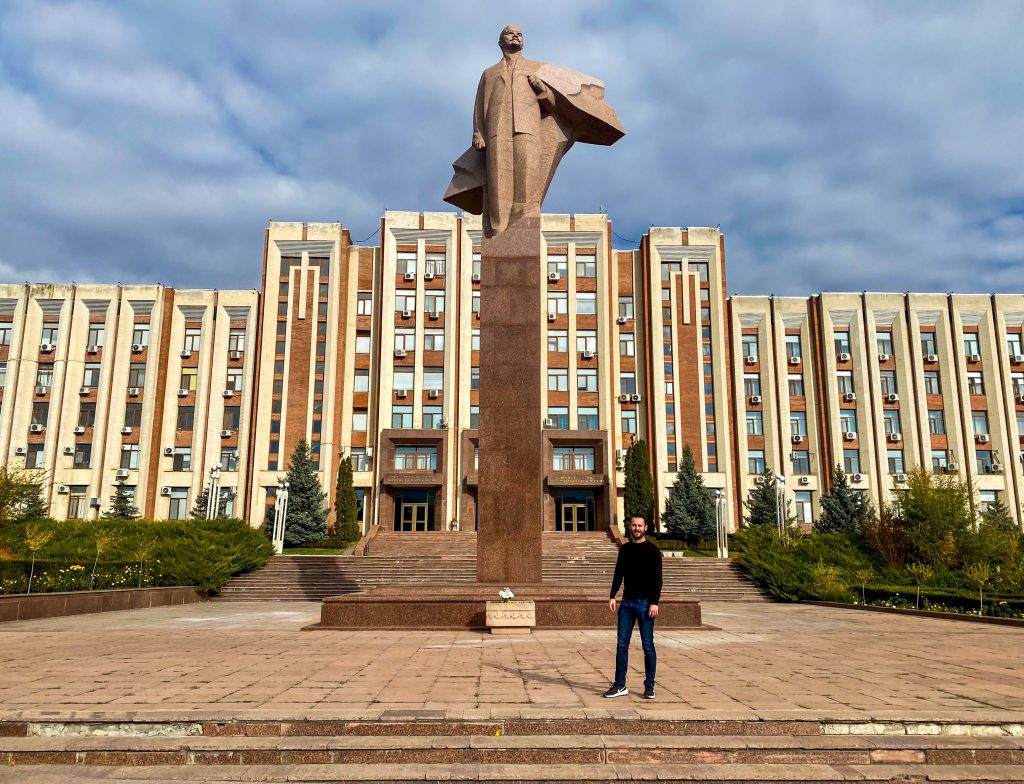 Visiting a country that doesn’t officially exist isn’t a regular thing to do. There are only a select few countries that are unrecognised (they claim independence but no other country recognises them as a country) and many are unstable or even illegal to enter.

Transnistria on the other hand is a relatively well travelled  unrecognised country in eastern Moldova. After wanting independence after the collapse of the Soviet Union, they fought a bloody independence battle with Moldova in 1992 but were unsuccessful.

If travelling to Moldova makes you feel like you are in eastern Europe, Transnistria feels distinctly Russian. They speak Russian, their currency is the ruble and there are numerous statues of Lenin in the capital Tiraspol.

It is relatively easy to travel to Tiraspol, the capital of Transnistria, either as a day trip or to stay for a few days. It will definitely be one of the stranger places you will go!

Which country has the largest single wine collection in the world? France, the home of wine? Australia, with all that space? The USA?

Nope, that title belongs to Moldova.

Milestii Mici is in the Guinness Book of World Records for having the largest collection at over 1.5 million bottles of wine stored in its 50km of tunnels. Take a tour to see just a small sample of tunnels where the cool air allows wines to be stored for up to 30 years. It’s rumoured that Angela Merkel and Vladimir Putin have wine stored at Milestii Mici, so it must be a good place to store it!

Top Tip: There are different tour options including food. A meal and three wines to taste cost 450Lei. Taxis take 20-30 minutes from Chisinau.

But after spending a couple of days there in beautiful autumnal weather, Chisinau isn’t as bad as it first seems. There are no but ticket monuments that are known around the world but that doesn’t mean there is nothing at all. I stayed at the Amazing Ionika hostel where they give you a map with plenty to see and do to spend a day or two.

Almost everything is centred on or just off St Stephen the Great Boulevard (Bulevardul Stefan cel Mare si Sfant in Romanian) including the statue of Stephen the great, the parliament building, Cathedral Gardens and the Triumphant Arch.

Top Tip: One thing I may recommend to avoid is the National Museum of Moldovan History. It was a collection of artefacts with little information spread out in a random array throughout the large building.

Coffee and bars of Chisinau 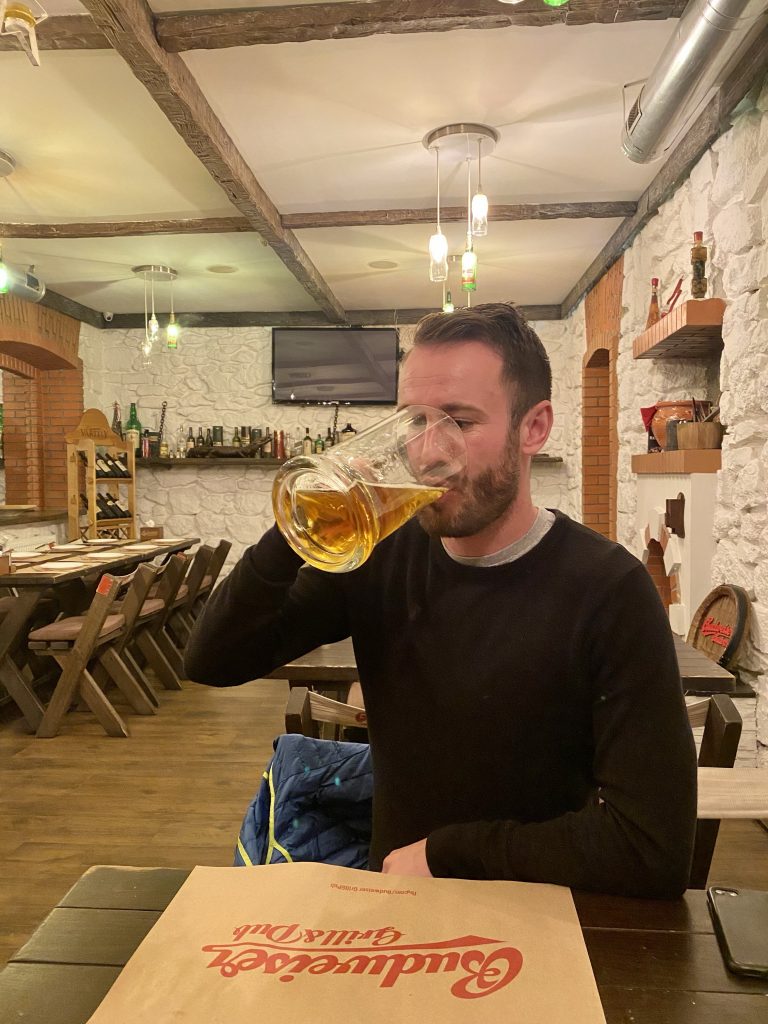 It isn’t known for its incredible coffee and beers but Chisinau is becoming increasingly popular with the younger generation looking towards the west to their future. Tucano Coffee is a small chain with coffee shops in Moldova and Ukraine. It is also one of the best coffees I’d had in a long time. They also had excellent cheesecakes and great wifi which would make working in them a treat.

Chisinau beer is a pretty standard lager beer that is found in almost all bars but I did manage to find a couple of trendy bars where I would happily have spent a few more hours. Unsurprisingly, with the great Moldovan wine available, a lot also sold very reasonably priced wine and some cocktails. My personal favourite is Marlene bar, a few blocks behind the Government House. I’ll say it quietly, but Chisinau may be a destination for sophisticated drinking in the near future…

Top Tip: As with most cities, Friday and Saturday night are the best for nightlife. Ask your accommodation for the best options.

See the lake at sunset

I had never heard of this place before going to Chisinau but just to the south west of the city is Valea Morilor Lake, located in the park of the same name (the photo at the top of this post is also from the lake). It’s just a 15 minute walk from the city centre but feels like its own little bubble. Watch joggers make their way around the lake as kayakers and canoeists circumnavigate it. Couples walk hand in hand as others stop to listen to the street performers. I was there in October and as the sun set on the golden leaves, it really was a beautiful sight so close to the concrete of the city. If you need a place to relax after exploring all day, I recommend going to the lake.

Top Tip: If you’re looking to stay in shape on the road, I definitely recommend heading to the lake. The stairs will make an excellent training companion!

I know almost every city has a market you must see, but the Central Markets in Chisinau sell everything. If you want to buy a tap, a bicycle wheel and a watermelon, all within the space of 5 minutes, the markets are the place to go. With each section clearly defined, but also running into each other, you’ll be sure to get some bargains if you know where to look. Get lost in all the narrow laneways

Top Tip: Being right next to the bus station, the markets would make an excellent place to stock up on fresh produce as you arrive or leave the city.

This is by no means an exhaustive list, just the things that I saw in my short time in Chisinau. If you have more time I would recommend going to the Cricova winery to the north of Chisinau, heading to the Chisinau Water Tower for views over the city and exploring some of the monasteries in the smaller towsn outside Chisinau.

Hopefully this will provide more information for those seeking to go to Moldova so hopefully it doesn’t remain Europes least visited country for long!