12 Best Things to See When Visiting Saranda, Albania in 2022

Saranda is probably one of the best hidden gems I’ve discovered. The small beach town in the south of Albania is a beautiful place that has everything you could want from a short break. History, mountains, beaches, good food and drink and nature surround this charming little town. I think Saranda will explode in popularity in the next few years as it becomes more well known.

But what is there to do in Saranda, Albania? Trust me, there is plenty to keep you occupied! Keep reading to find out the best things to see in Saranda or that can easily be reached on day trips from Saranda.

The 12 Best Things To Do In Saranda, Albania

The beach is one of the things that draws thousands of tourists to Saranda every year. However, I have to say that the beach in the centre of town, closest to the ferry terminal, is not the best beach around. It is quite small and rocky.

Keep walking to the other end of the promenade further south and the beach is a lot nicer and a beautiful place to spend an afternoon in the sun. There are other beaches in other towns which I’ll get to shortly. 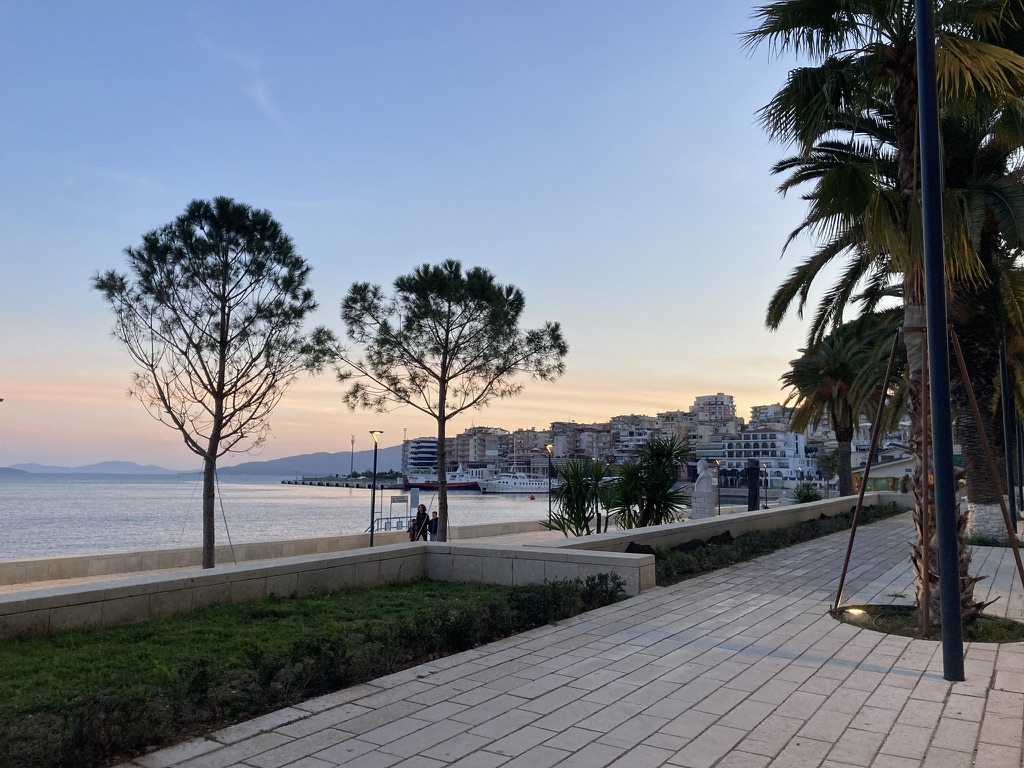 The promenade is what makes Saranda such a draw for all those tourists. Stretching over 2km from the ferry terminal to Paradise REsturant at the other end, the large wide promenade is a pleasure to walk along.

Flanked by palm trees, small locally owned shops and a few excellent bars and restaurants, the promenade at Saranda can be walked over and over again seeing the changes betweem night and day.

During Albanias communist regime, Enver Hoxha built over 170,000 bunkers up and down the country in his fear of being invaded. They were designed for two men to sit and wait to defend Albania if an invasion was ever to take place.

Many of these are still around today and in the most unusual of places. There is one right in the centre of town that now has a bakery next to it, and plenty up on the hill up to Lëkurësi Castle. 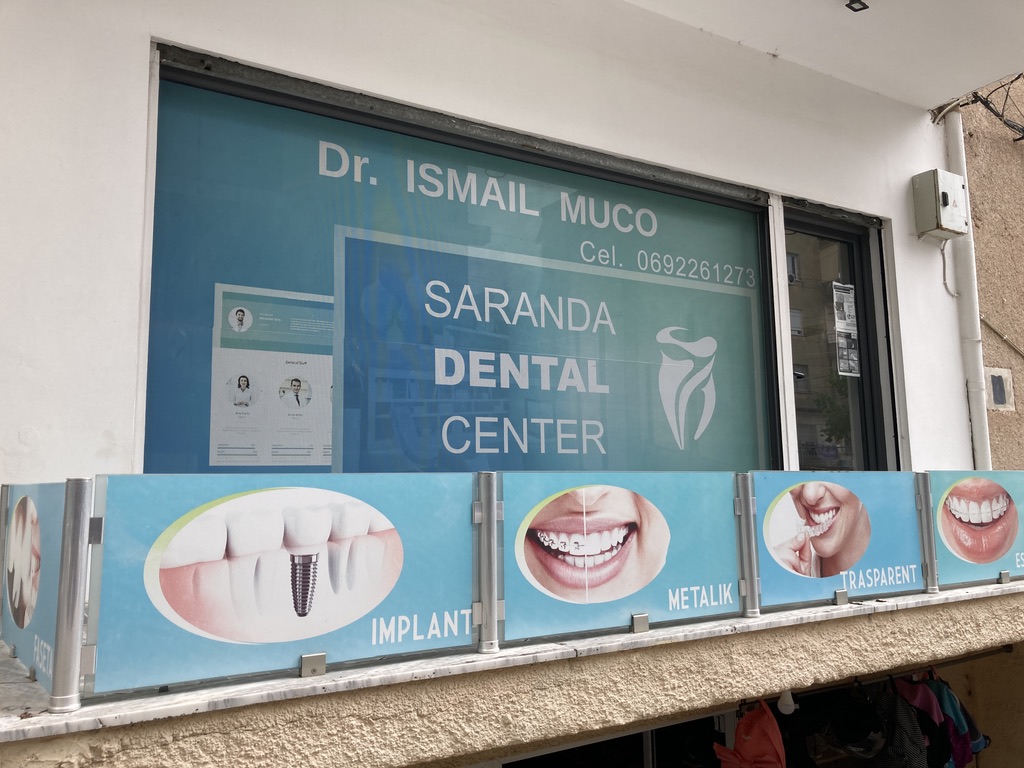 When I first got to Saranda, I walked along the streets and something stood out for me.

The number of dentists in the town!

For a small town, there is an unusually large number of dentists. It is starting to become a site for medical tourism with many Greeks coming over on the ferry from Corfu for cheaper treatment than they can get at home.

As it had been a while I also went to the dentist whilst I stayed in Saranda to have my teeth cleaned by a hygienest. I booked in at the Saranda Dental Centre and was very happy with the experience for 3000LEK (€25, £21) and the English speaking dentists. It is also possible for teeth whitening for €150 if you so wish.

Nowadays there is little more to look at than the outline of a building in the ground made of stone, but these stones were once the foundations of the only synagogue in Saranda. There is a small sign with some information about the past but I feel this is one area that could be developed in Saranda.

You are more than likely to see it if you take a bus to or from Saranda at any point as buses and taxi’s depart from next to the synagogue. 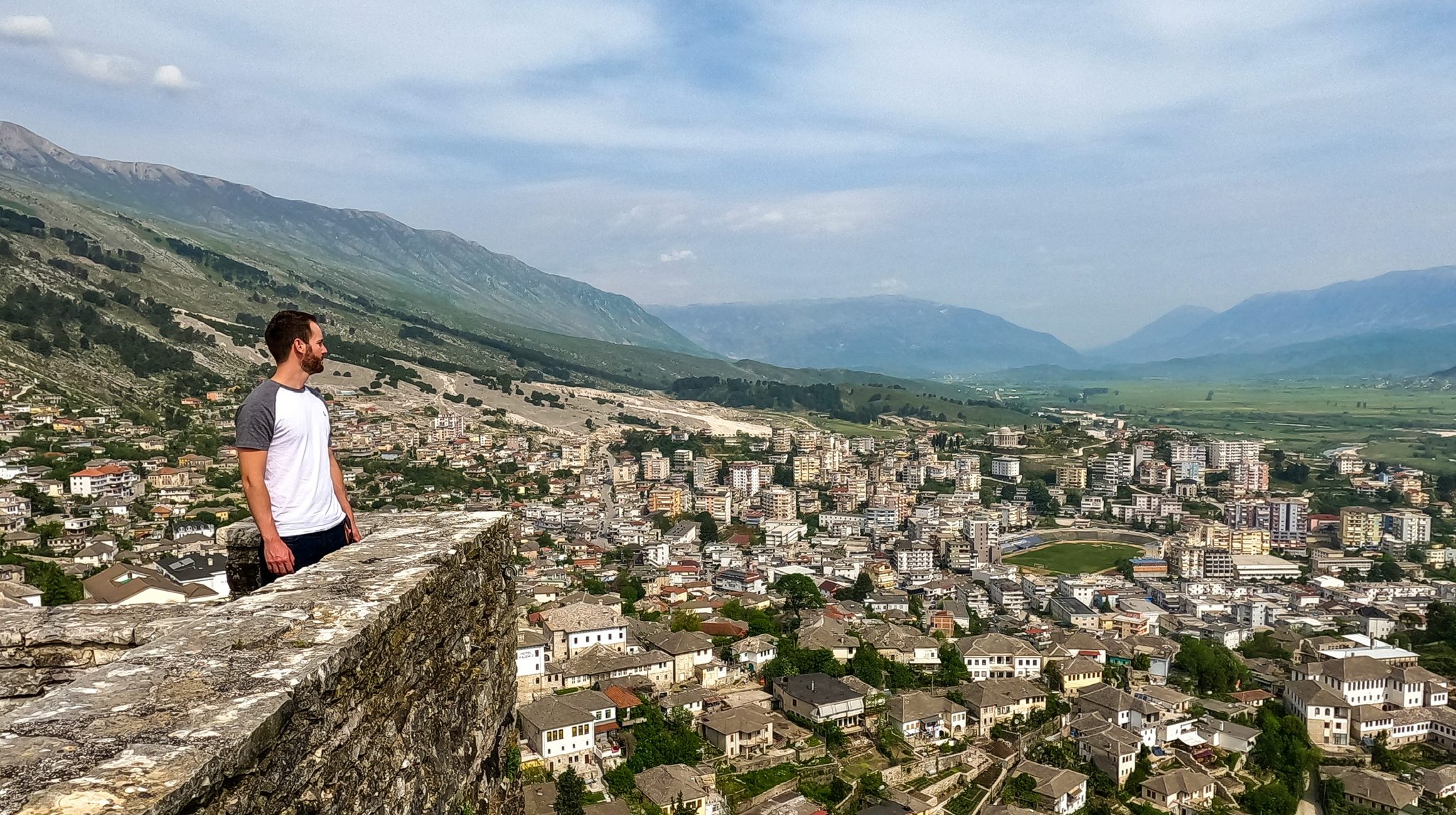 Gjirokaster is an absolutely beautiful town, an hour and a half away from Saranda. It could easily be seen as a visit in it own right or even as a weekend trip if you decide to stay in Saranda for a while.

The castle and bazaar are beautiful and fully deserve their status as UNESCO sites.

If you are looking to do it as a day trip you can read my guide here.

Ksamil is one of the most beautiful places I went to in Albania. How this isn’t more popular with mass tourism is beyond me but I’m so glad it isn’t!

Picture perfectly blue clear seas and empty beaches. It retains its small town charm as there are few tourists there.

It is only 30 minutes south of Saranda on the bus which costs 150LEK, a little more than £1 and can be visited for the day, as part of a trip to Butrint or as a place to stay.

Trust me, you won’t want to miss it out on one of the best things to do in Albania!

The Blue Eye, or “Syri i Kaltër” in Albanian, is a natural phenomenon located a short bus journey just outside of Saranda. There are plenty of tours that run to the Blue Eye but it is very easy to see by yourself.

The Blue Eye is a large underground spring that feeds pristine clear blue water as it bubbles up into the Bistrice River. There is a small coffee shop close by and some very nice hikes in the area as well.

Check out my guide on How To Get To The Blue Eye From Saranda Without A Tour.

Butrint has experienced more history that most places.

Originally built by the Ancient Greeks before the Romans took control.Later it became Christian and was controlled by the Byzantine and then Ottoman empires, it is now a must see when you visit modern day Albania.

It can easily be visited as a day trip from Saranda using local buses but there are also many tours available in town for those that are short on time. I went for the day trip option.

A short drive or a long walk up the hill overlooking the town of Saranda is Lëkurësi Castle.

Built in the 1500’s it provided views of the entireity of Saranda and the coastline as far south as Butrint. Nowadays, the main attraction is the castle itself and the incredible views. There is also a bar and restaurant at the top which can provide you with liquid refreshments  after you have walked up. Head there for sunset for a real treat.

If this castle isn’t enough, check out the Monastery of Forty Saints nearby to learn how Saranda for its name.

Being right on the coast, it would be rude to eat at many of the amazing restaurants and not have seafood. I enjoyed a few seafood dishes whilst in Saranda with a special mention going to Limani Restaurant where I had an incredible seafood pasta which cost 850LEK, or about £6 for an incredible meal in a fine dining (by Albanian standards) restaurant.

You can also see a few fishing boats in some of the smaller docks around Saranda and even guys on the street selling fish next to the sea front. If you are after cheap but quality seafood, Saranda should definitely be on your list!

12. Spend time at one of the many bars along the coast

There are so many options when it comes to enjoying an evening beverage in Saranda. One of my favourites has to be Paradise Restaurant on the opposite side of the bay to the ferry terminal. Grab a beer with friendly hospitality and have a perfect view of the sun setting over the sea between Saranda and Corfu.

If cocktails are more your thing, check out Jericho bar, a second story bar that does amazinf cocktails with a view that is second to none looking down on the beach and promenade below. This is a bit pricier but the ambience and views make it worth the price.

If you have ever wondered is Saranda worth visiting, the short answer is a resounding yes!

Whether you are into history, nature or just want to relax on stunning beaches Saranda is the place for you.

The town has a small town vibe that comes alive in the evenings and weekends but with so much to see and do in close proximity, it really should be high on your list of places to visit soon!