With advertised fares on budget airlines as low as £4.99 and even 99p back in the day, budget airlines have changed the way that people travel. With prices that low, it is an absolute no brainer to book them isn’t it? Why would you ever fly with more expensive legacy carriers such as British Airways when budget airlines are so cheap?

The way that budget airlines make their money is by all the add ons that you have to pay on top of the base fare, a business model that has now been adopted by legacy carriers. Extra baggage, food on board and early boarding all cost extra from a simple ticket.

One thing that budget airlines are now charging for is luggage that goes in the overhead locker. Whilst a small bag that fits under the seat in front of you is included, unless you pack ultra light or only going away for a short period of time, you will have to pay to take carry on luggage.

A weekend away in a European city in summer can be fine. But if you go further afield for longer, its highly likely you’ll want some extras. I pack quite light and only have my 40L backpack with me, but even with that I would need to pay for extra luggage on budget airlines as it goes in the overhead locker.

So with all these additional charges, are budget airlines still worth it? And does it make legacy carriers cheaper in some cases?

Can a legacy carrier be cheaper than a budget airline?

I’m going to use an example that I have actually seen before.

I flew to Albania from London and was looking at very similar flights before I went. I have now put in new dates in late September for a two week holiday with similar results.

First, I checked Wizz Air, an airline I have flown before and have been very happy with. As budget carriers go, the leg room is ok and I haven’t had any issues with them

A round trip from London to Tirana with Wizz Air was £39.99 each way, which is the first prices that you are shown. What are bargain you start to think! Showing each flights means you are seeing a smaller number which tricks you into thinking it is cheaper than what it really is.

However, that is only for a seat and a small bag that will fit under the seat in front of you e.g. a small backpack that is 20L or less. 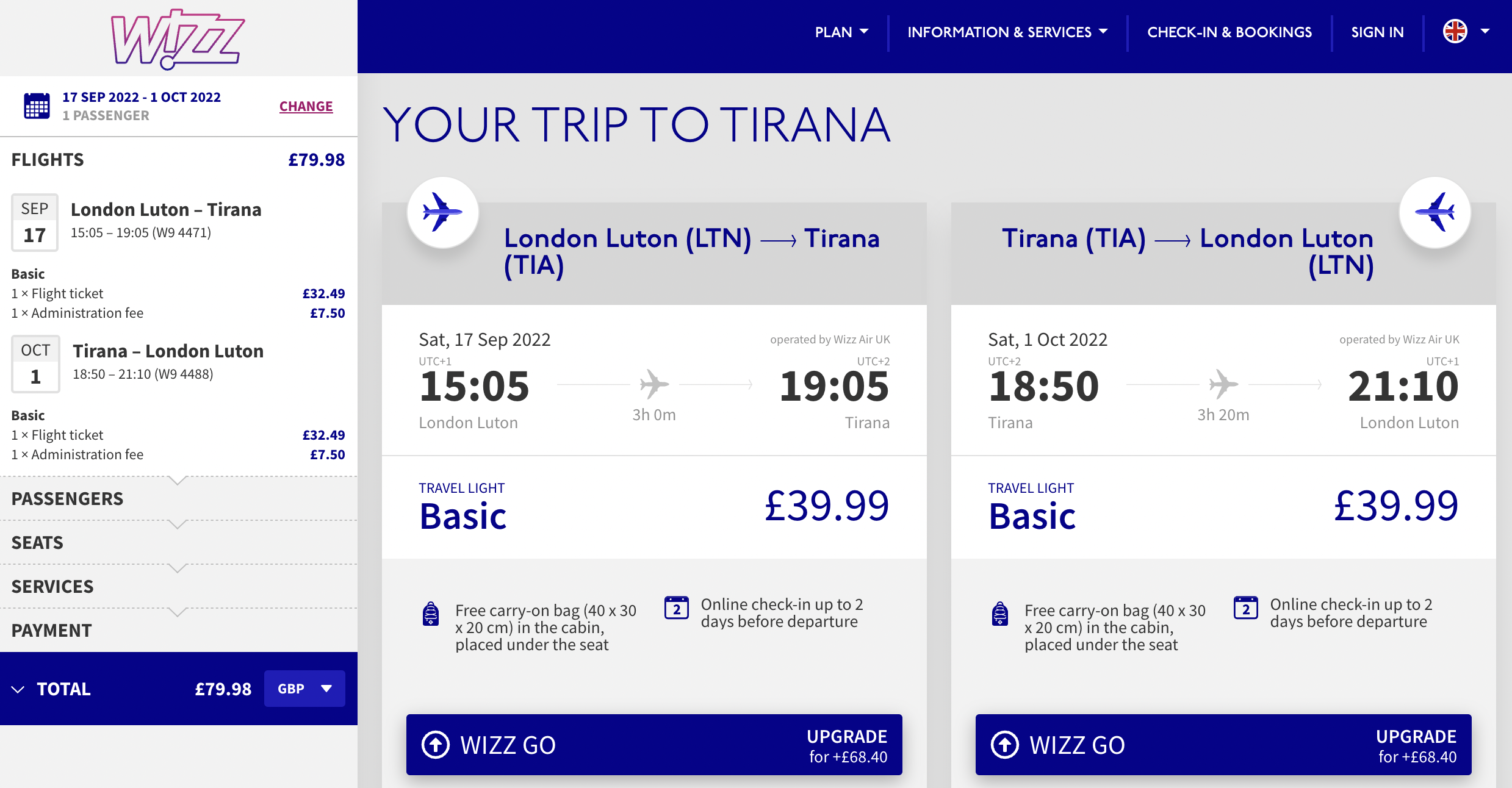 However, as most people would take at least one bag, at the very minimum a carry on bag that would go in the overhead locker will add a significant amount to the fair.

For exactly the same flight, once I add a carry on bag the price suddenly goes to £216.78?! 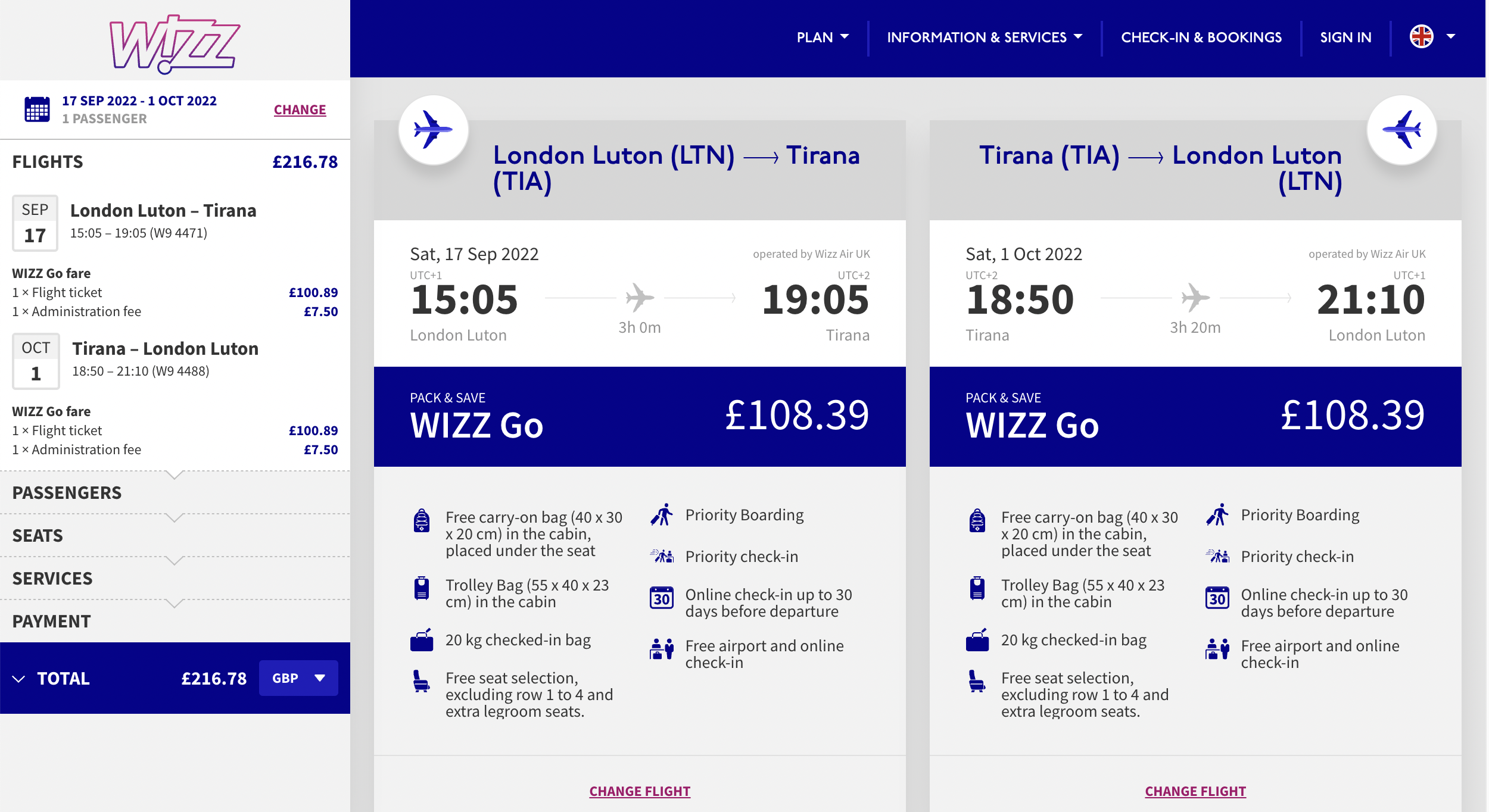 Now here is the disclaimer:

With this package, whether you have a 40L carry on bag or 20kg bag in the hold, this is the same price. So for this reason, you may as well take a larger bag.

But if you like taking hand luggage for the speed of being out of the airport, this price isn’t going to cut it for you.

These flights are from London Luton to Tirana with Wizz Air, but lets look at British Airways… 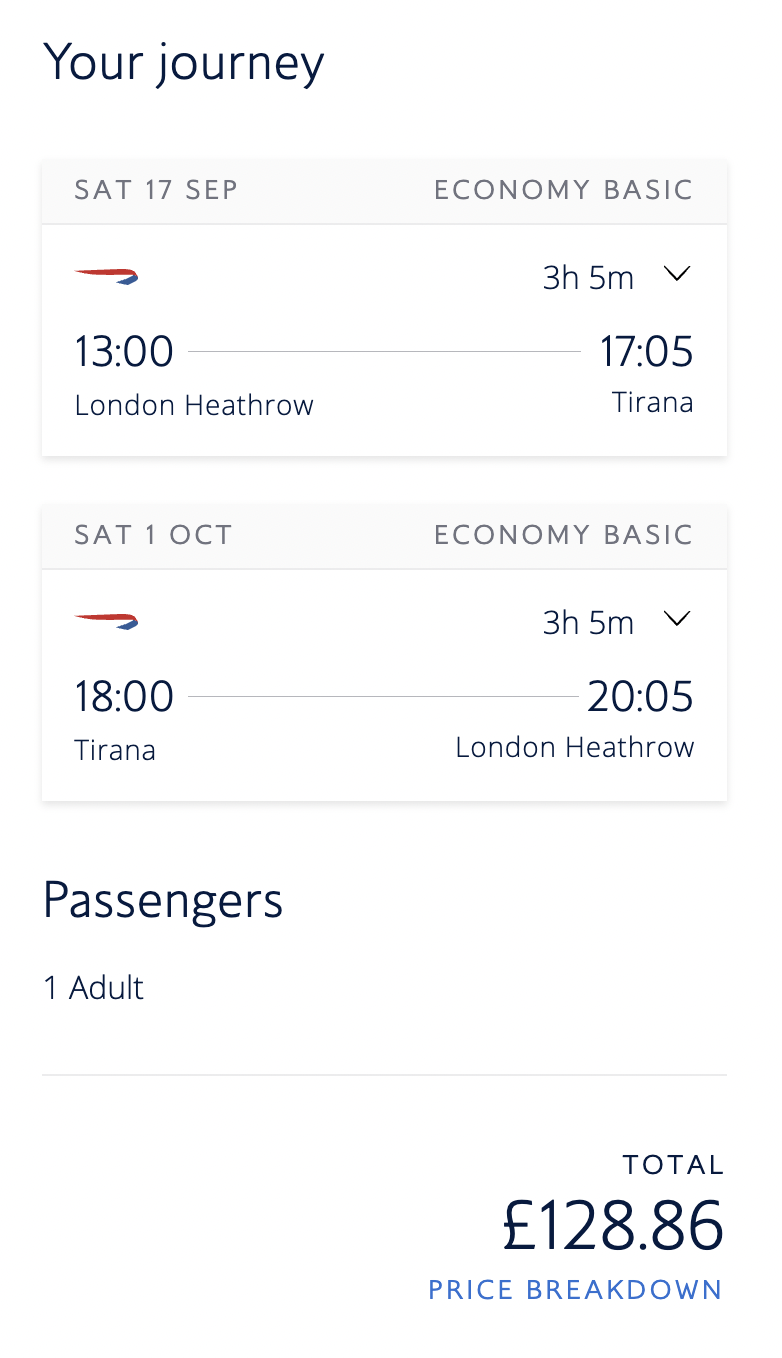 As you can see from this screenshot, the total price for flights from London Heathrow to Tirana is £128.86.T There isn’t an each way option here, just the total price. Here’s another screenshot below showing that it is a fare with “no checked baggage” included.

So if you just want to take a small bag that is within the dimensions of hand luggage and weighs less than 7kg, then a BA flights might be cheaper for you. 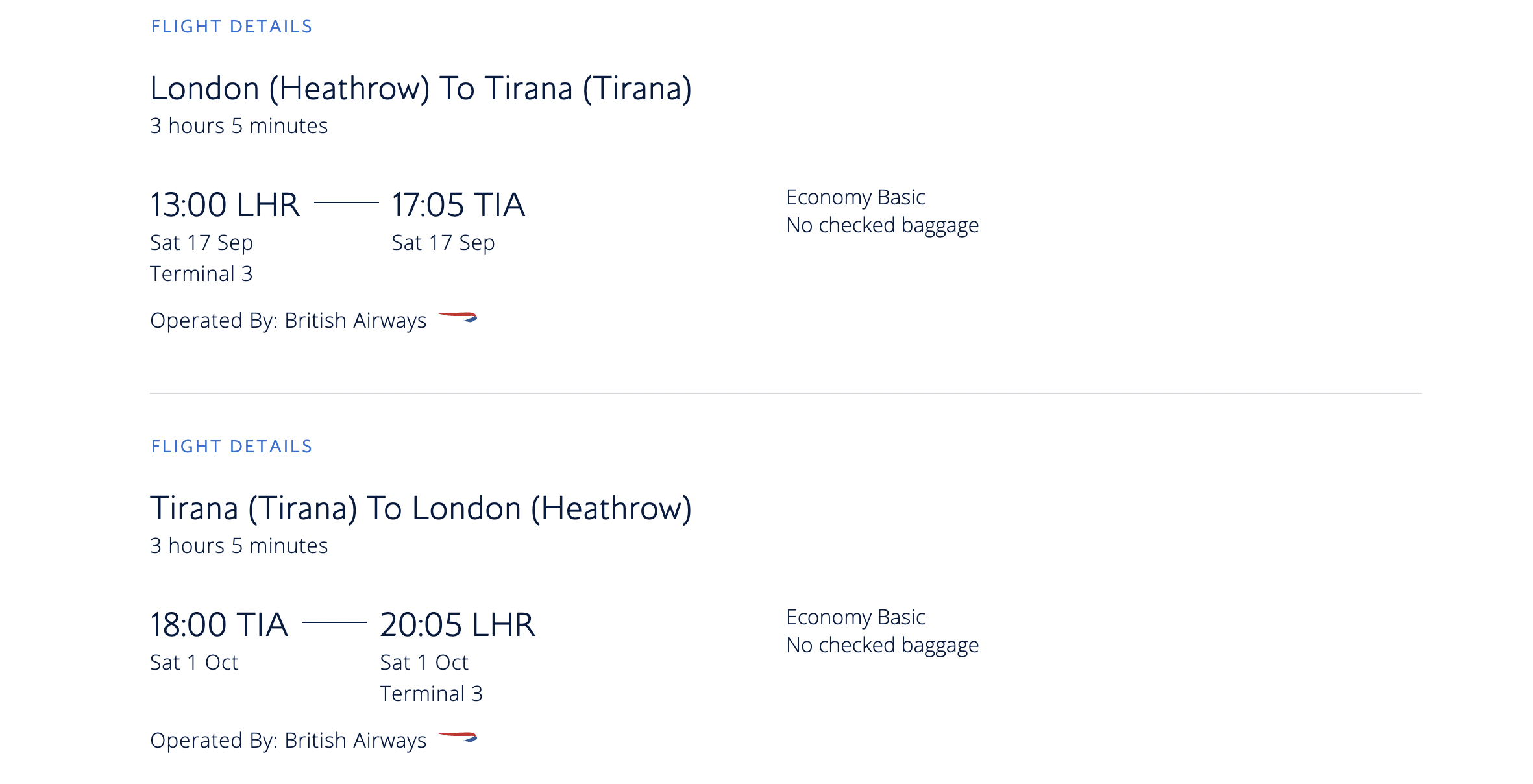 But what compared to the Wizz Air flight above, what if you want to have a bigger bag that will need to be checked in?

Once you have added a checked in bag to the price of the flights above, you can take up to 23kg on British Airways for £172.86 which is still cheaper than buying a flight with luggage on Wizz Air. 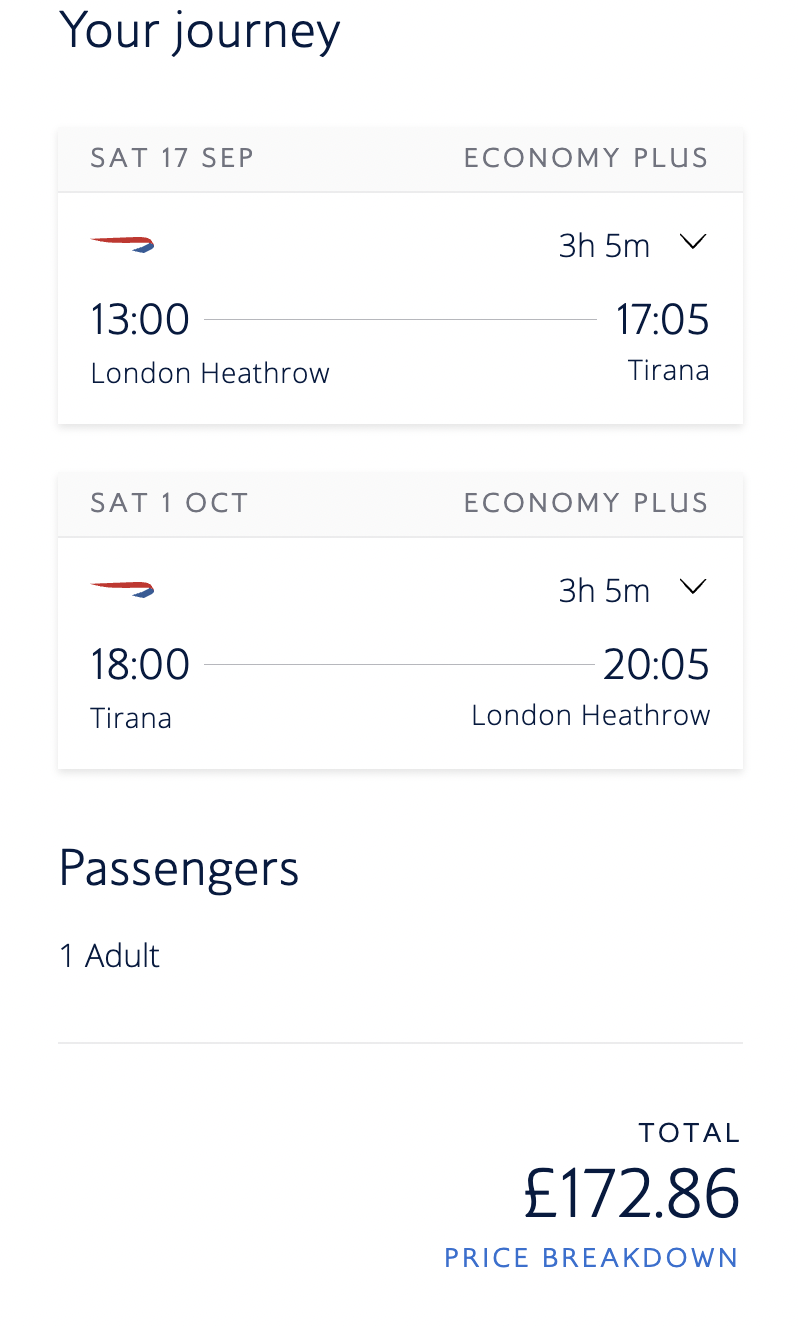 For those that are into the points and miles game, with British Airways you can also earn Tier points and Avios points that can benefit you in future with benefits or money off flights. If you have a suitable credit card to buy these flights you will get the double benefit. But that is a whole ‘nother post right there!

But what about other carriers?

Am I being biased by just picking two?

Well, no not really.

This it the price for the dates from London to Tirana on EasyJet with no hand luggage is £81.99. But once you include hand luggage, the price becomes £207.98. 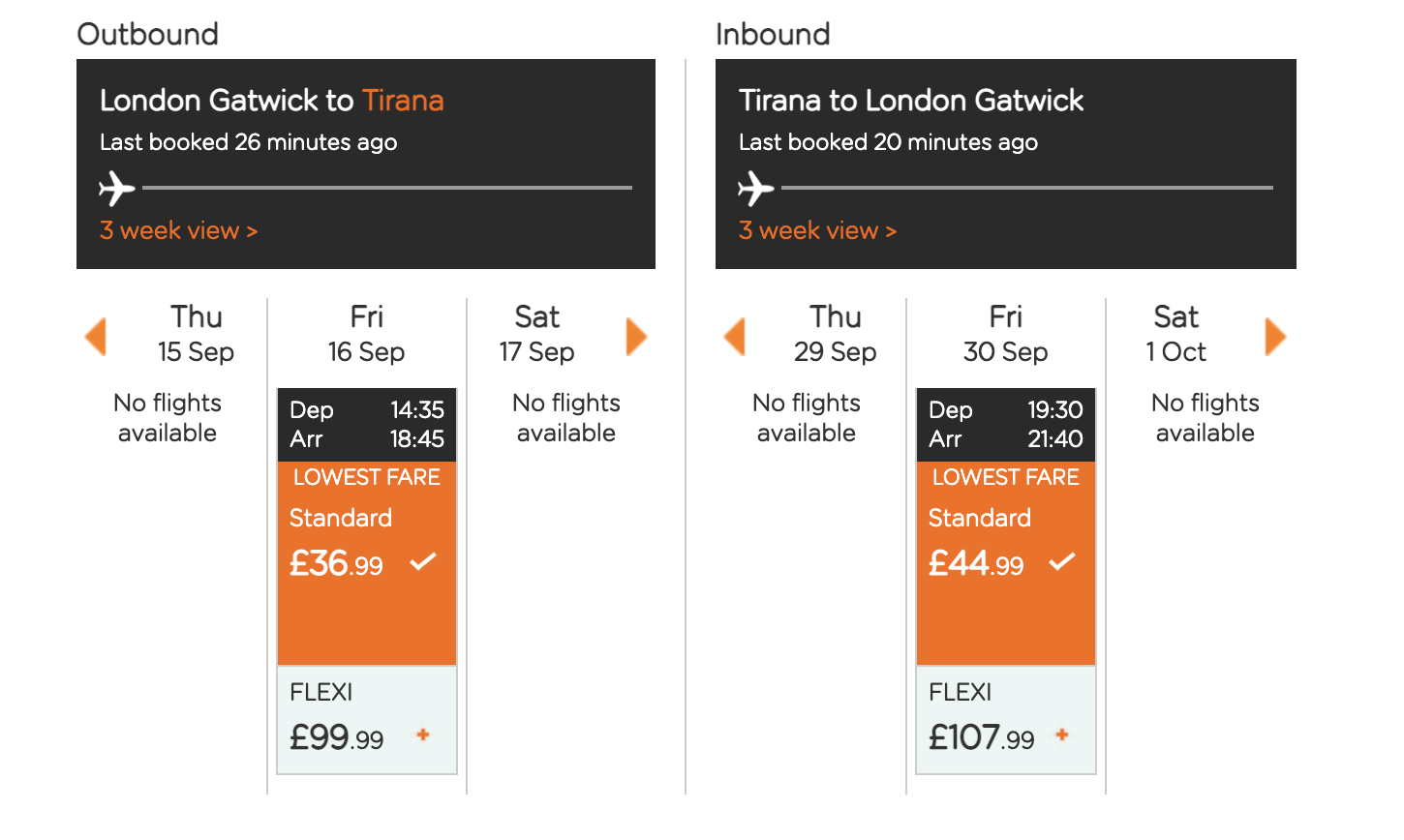 Here is a breakdown of all the prices depending on what you want to take with you:

(If you are looking for a card that doesn’t charge ATM or currency fees abroad, I highly recommend Wise which I have now used in over 15 countries! Use this link to start saving abroad now!)

So What Ends up Cheaper?

As you can see form the table above, the cheapest price for a flight from London to Tirana one the dates that have been selected are with Wizz Air if you don’t want any bags at all but British Airways if you want even a carry on bag.

Obviously these are only for a two week period in September 2022 but it shows that you can’t take the first price as gospel. I have also done this for various other cities in Europe with other budget airlines at different times and the budget airlines aren’t always cheaper when taking a bag.

If you are looking for a bargain or to travel on a budget, sometimes it is actually possible to travel cheaper on a legacy airline than on a budget airline.

Getting to and from the airport

The above calculations don’t take into account the fact that all of these flights depart form different airports in London.

If you are going from central London to Heathrow for a British Airways departure, you can travel on the tube for as little as £3.50.

But travelling from central London to either Luton for Wizz Air or Gatwick for EasyJet requires travelling on National Rail which can be £10+ getting to the airport.

Adding these additional costs can make you “cheap flight” to Tirana a little bit more expensive. 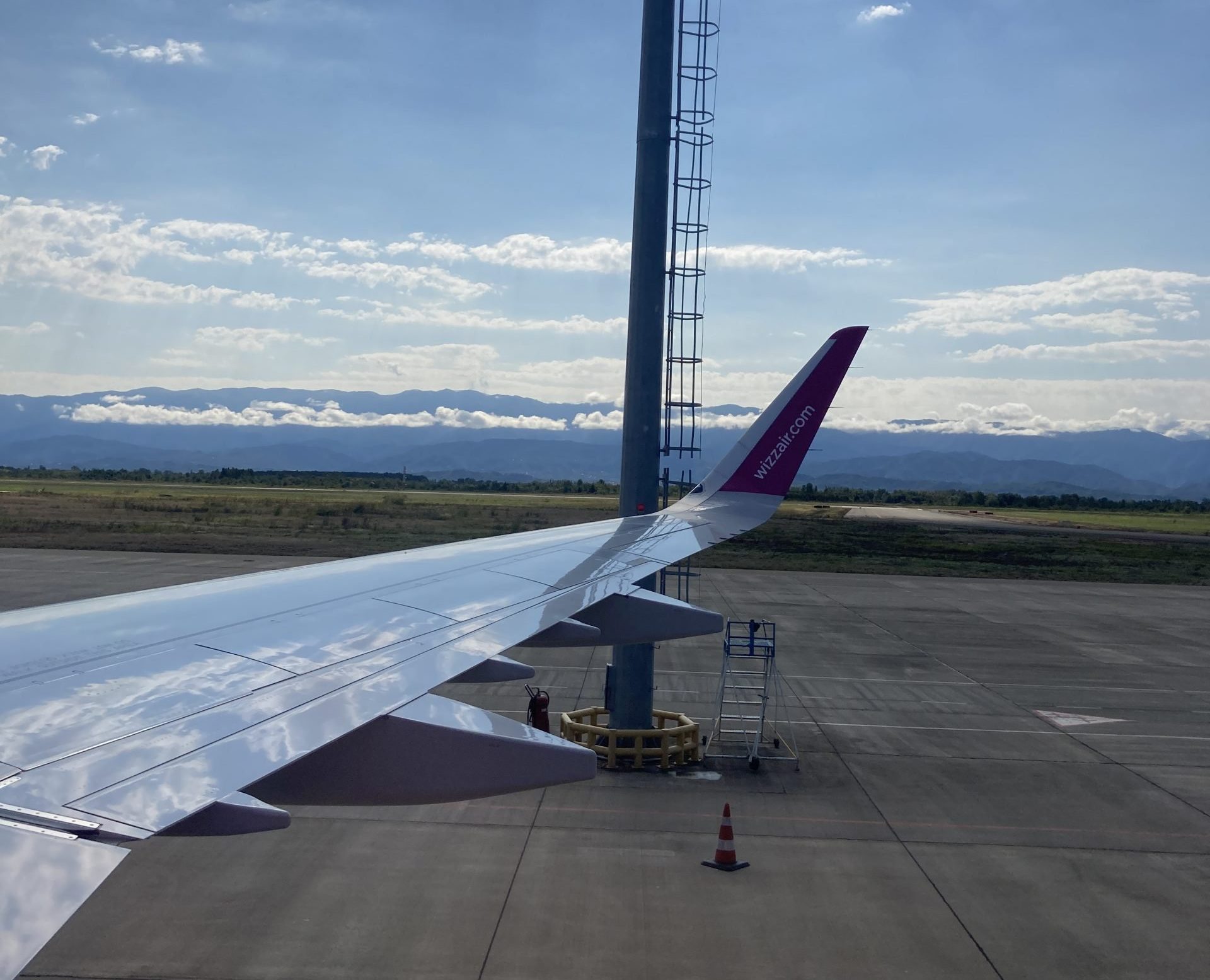 Budget airlines get so much praise for their cheap prices these days.

As the examples above show, they aren’t always the cheapest option depending on how much luggage you want to take. Add in the fact that you then have to get to an airport that is slightly outside of London and you may actually be worse off flying a budget airline than British Airways.

Always check what airline you are flying with and if you can get a better deal flying with a different airline with more things included if you are taking a flight.

3 thoughts on “Budget Airlines: Are They Always Cheaper?”