When visiting the south of Albania, you’re spoilt for choice for things to see. From the great beaches and coves, to the main town of Saranda, there’s countless ways to spend your day.

One of the best options, as well as the most popular, is to visit Butrint National Park, a UNESCO world heritage site just 17km south of Saranda.

Here I’ll tell you exactly what you need to do to get to Butrint National Park.

Why You Should Go to Butrint National Park

Butrint is one of those places that I can’t believe I hadn’t heard of.

Sitting right down the bottom of Albania, not far from the Greek border, it’s an abandoned town with thousands of years of history. Originally formed as a Greek outpost, it was then taken over by the Romans, the Byzantines, Venetians, French and Ottoman where it was deserted in the 19th Century and became a part of Albania when they declared independence in 1913.

Even with all that history, it is thought that only 15% of it has been discovered with new findings occurring all the time.

As well as history it has an abundance of flora and fauna, including a dense forest. On my visit I saw turtles, incredibly colourful butterflies and even a small snake slither in front of me. I’ve read that you can see bottlenose dolphins on rare occasions but I wasn’t so lucky on my trip. The park has views of the Butrint lagoon and mountains behind making it perfect for all types of nature lovers. If its views you’re after, you won’t be disappointed!

How to Get to Butrint From Saranda

Whilst it would be possible to visit Butrint from further away in Albania, or even Corfu on a day trip, most travellers would start their journey in Saranda. Even if you are travelling from further away, unless you have your own private car, you will have to transit through Saranda at some point.

A tour or a taxi (costing 1300LEK) is possible but it is a lot cheaper and extremely easy to get a local bus. They cost 150LEK and depart at half past the hour, every hour from 5.30am to 8.30pm. The bus departs from the corner just down the hill from the ferry terminal which can be found on the map below. They are normally waiting there from quarter past the hour. 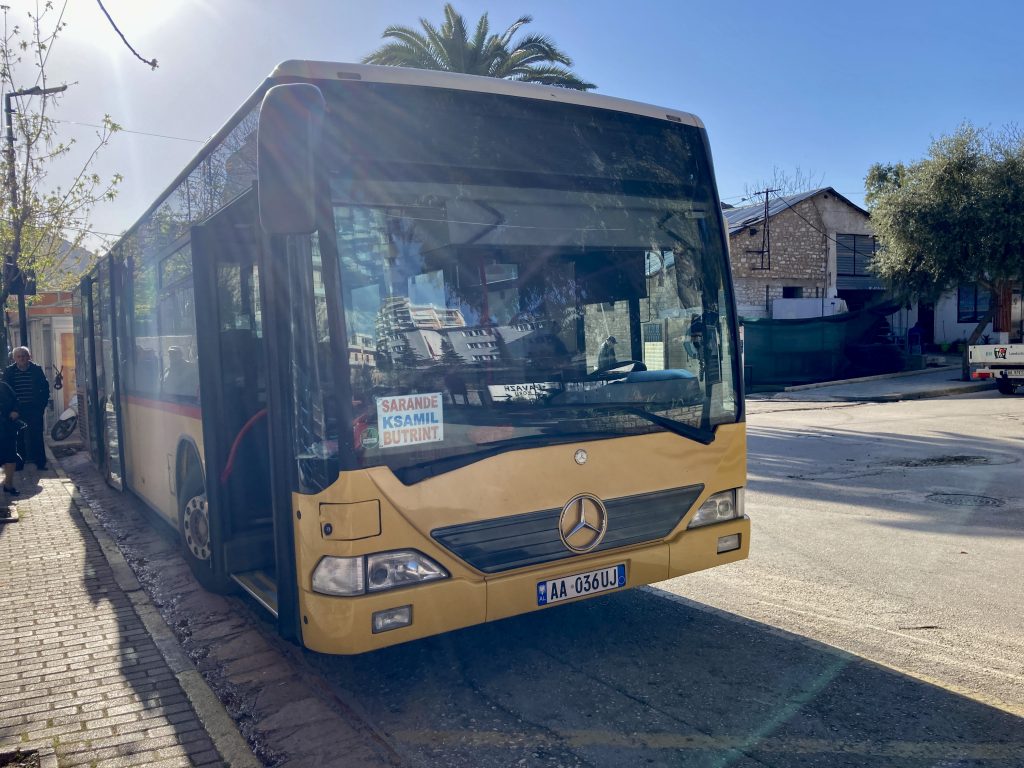 The bus takes roughly 40 minutes and you pay a conductor who will come around once on board. They normally have change and some of them can speak some English if you tell them where you want to go. The bus will meander through Saranda town and pick people up at a few stops before leaving the city. If you are staying in the south of Saranda, talk to your accommodation to see if you can get the bus from a stop close to where you are staying.

I recommend getting the 8.30 bus which will get you to Butrint just after 9.00 which is when it opens.

I highly recommend getting a window seat on the right hand side for the drive down for stunning views of the coastline!

At the end of the line, the bus will stop in the car park about 200m away from the entrance. Just outside the park is a price list showing that it is 1000LEK (£6.90, $9USD) for entry with a discount for students and kids.

Just after you have paid for entry, there is a small stand with guides in many languages which are very informative and will help you navigate the park.

Just in front of you is the Venetian Tower. Built as a fortress by the Venetians as a defence against the Ottomans, it sits across entrance to the lagoon and the Triangular Fortress. From here turn left and walk up to the Roman Theatre.

I suggest heading here early on especially if you are into your photography to get photos of the place with few others around. The ancient theatre could’ve held 2500 people in its hey day and you can sit on the steps at the top and imagine an ancient performance.

If you continue on the path that you came in on, you will soon reach the Baptistery, containing one of the best preserved mosaics from the Byzantine period in the region. It is usually covered with plastic sheeting and sand to preserve it for future generations but if it is on show when you visit, count yourself very lucky!

Keep following the path and you will get to the Great Basilica built in the 6th century, one of the earliest Christian buildings in Albania coming just 100 years or so after Christianity was introduced to the region.

You will also get to see the old fortress walls and the incredible views of the lagoon and mountains beyond. At many points on the walk there are informative signs explaining the age of the walls and how many were improved upon over time by the different occupiers of the land. The map that you should’ve collected at the start (!) also has some information on many of the sites in the park.

Head up the hill to the Venetian castle, a 15th century castle that was almost entirely rebuilt in the 1930’s for even more incredible views including of Corfu, the Greek Island just off the coast. Underneath the castle is a small museum with artefacts and pottery that has been discovered as well as information on the history of Butrint and the surrounding areas.

How long to spend in Butrint National Park

I entered the park about 9.15 and left just after midday. I walked the entire way around the park, went off trail in a few places and read every sign there including in the museum. 2-3 hours should be plenty but could be done in less time. There is a cafe on site which was closed when I was there. You may also want to take a packed lunch and eat that inside the park, especially in summer. When I was leaving at midday, it was noticeably busier and a few tour groups turned up so I recommend getting there early. Remember that the buses back leave at 30 minutes past the hour so try and coincide your visit with leaving around this time.

What to do in Ksamil

Ksamil (pronounced Sa-meel) is a beautiful town with a ridiculous number of beautiful beaches in almost every cove of the peninsula.  I checked out a few including the main beach, Paradise beach and Lori Beach. Its a very walkable town with plenty of restaurants and hotels if you did want to stay the night. 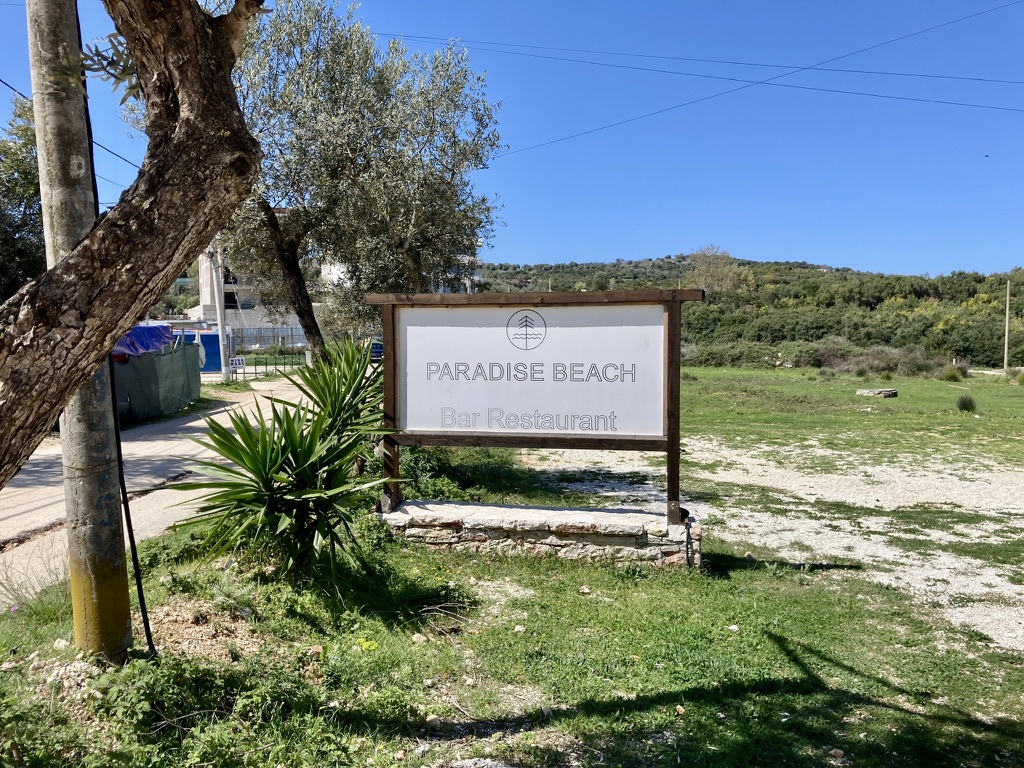 Kayak and jet ski rental are also popular here. Unsurprisingly considering how beautiful and calm the sea is.
If following my itinerary, stopping for lunch on your way back is a great idea. Bar Restorant Pizza Oxhaku is a popular option in town or if you are looking for sea views, head to Rilinda for seafood pasta or an incredible Trileche.
There’s also plenty of cafes and beach bars open in summer and the option to take boat trips to the small surrounding islands.
Note: I went in April 2022 and many places weren’t open. Whether this is a hangover from the pandemic or because the season hasn’t started yet I’m unsure but I can imagine in the peak of summer it is a very lively town.

If you’ve never heard of Butrint National Park in the south of Albania you won’t be alone. However I strongly urge you to add it to your list!

It’s makes such an easy destination to travel to from Saranda that it would be a crime to miss it. There aren’t many places that have incredible Roman ruins, Byzantine churches, Venetian watch towers all surrounded by incredible views of nature.

Have you been to Butrint National Park? What did you think of it?