Essaouira Travel Guide – Best Things To Know Before You Travel

Essaouira was a small hippie town on the Moroccan Atlantic coast that has now developed into a welcoming and relaxed destination. It still has a traditional Medina and market but Essaouira beach is now a popular site for windsurfers and kite surfers for around the world. It’s also on a well travelled route for those that travel around Morocco.

Getting there and away

Essaouira does have an airport although it doesn’t have connections to the rest of Morocco and only has a daily flight to Paris. Pre pandemic, budget airlines flew from England and France to Essaouira during the summer season only however this hasn’t restarted yet.

The easiest way to get to Essaouira from Marrakech is by using the fast, comfortable and frequent buses from Marrakech. I travelled with Supratours and costs only 80DH one way for the 3 hour journey from Marrakech. CTM buses also travel this route. These companies also run buses to Agadir and Safi on a less frequent schedule.

If you are looking for more luxury, you should be able to find private transfers from Marrakech to Essaouira. Prices start from €80.

Getting around the town

The bright blue “Petit taxi’s” can be found going all around town at all hours. All journeys within the town limits are 7DH which goes up to 8DH after 8pm. However if you are staying in the Medina, walking is your only option as cars aren’t allowed within the city walls. You will need to dropped off at one of the gates (Bab) around the town, Bab Doukkala and Bab Marrakech being the most popular.

There are some local buses that go to smaller towns up and down the coast with an infrequent timetable.

Where to stay in Essaouira

Your two main choices of where to stay in Essaouira comes down to this: inside or outside the Medina.

If you prefer to stay in big name hotels that has the amenities to match, you will be better off staying outside the Medina. Lining Essaouira beach are 5 star spa hotels, cheap hostels and everything in between. If you’re in Essaouira for kite surfing, staying outside the medina in one of these places is the best idea.

However, staying in a riad inside the city walls is a much more authentic Moroccan experience. Prices range from as low as £10 to £200+ per night.

Where to work in Essaouira

After struggling to work in my AirBnB’s due to poor wifi I was in desperate need of finding somewhere suitable to work in Essaouira. A few cafes and restaurants were fine to work in such as Cafe Panoramique and Loving Surf at the south end of the beach. There is also a space available Hotel Riad Zahra with views out to sea from the converted room on the top floor of the hotel.

However, by far the best place to work is Noqta Space in the Medina. I couldn’t find much information online as it had only recently opened but through their Instagram page I got in contact and were hosted by Dounia and Abdou. The internet is great, the areas wot work in are comfy and there are private spaces upstairs if you have a lot of calls. The coffee is also excellent! If you do go there, tell them Dan says hi!

If you can’t get a SIM card at the airport, SIM cards ca be purchased from the Orange shop just to the north of the medina. 100DH for 20GB for 30 days which can then be topped up if you plan to stay longer. The 4G had a strong signal almost everywhere with quick speeds. Wifi is available in most places but isn’t all that good, all the accommodation I stayed in had pretty poor wifi speeds.

Like the rest of Morocco, they use European style round pin plugs.

Take cash as everywhere will take it but only the bigger restaurants and bars will accept card. There are ATM’s inside the Medina and a few outside. 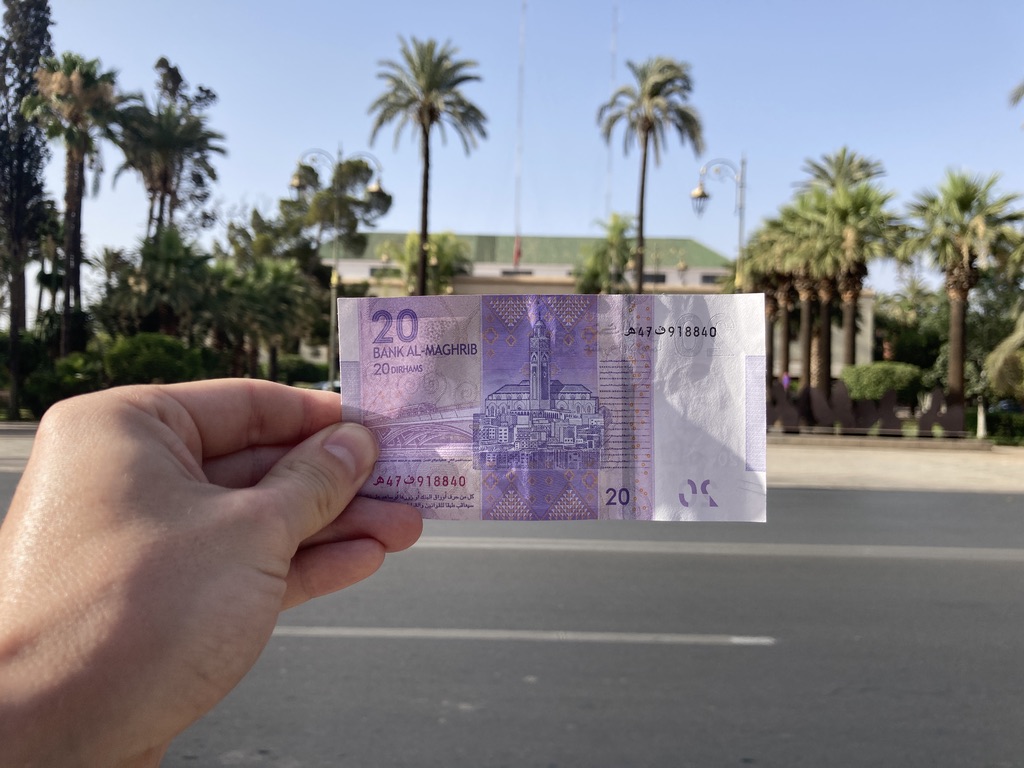 Carrefour is a large supermarket at one end of town that does a wide selection of western branded food and alcohol but is actually quite expensive. Buying groceries from the central market in the medina is a lot more affordable not to mention fresher, healthier and helping locals.

Best things to see in Essaouira

The absolutely massive beach is a must see. If you are just looking to sunbathe and relax, you are better off heading to the north end near the Medina. The further south you go, the more the wind picks up which is great for adventure sports, but not great for family’s.

The wide open promenade is a great place to walk at all times of day but has a great buzz on weekends when family’s from Marrakech arrive to escape the heat. There are plenty of good bars and restaurants 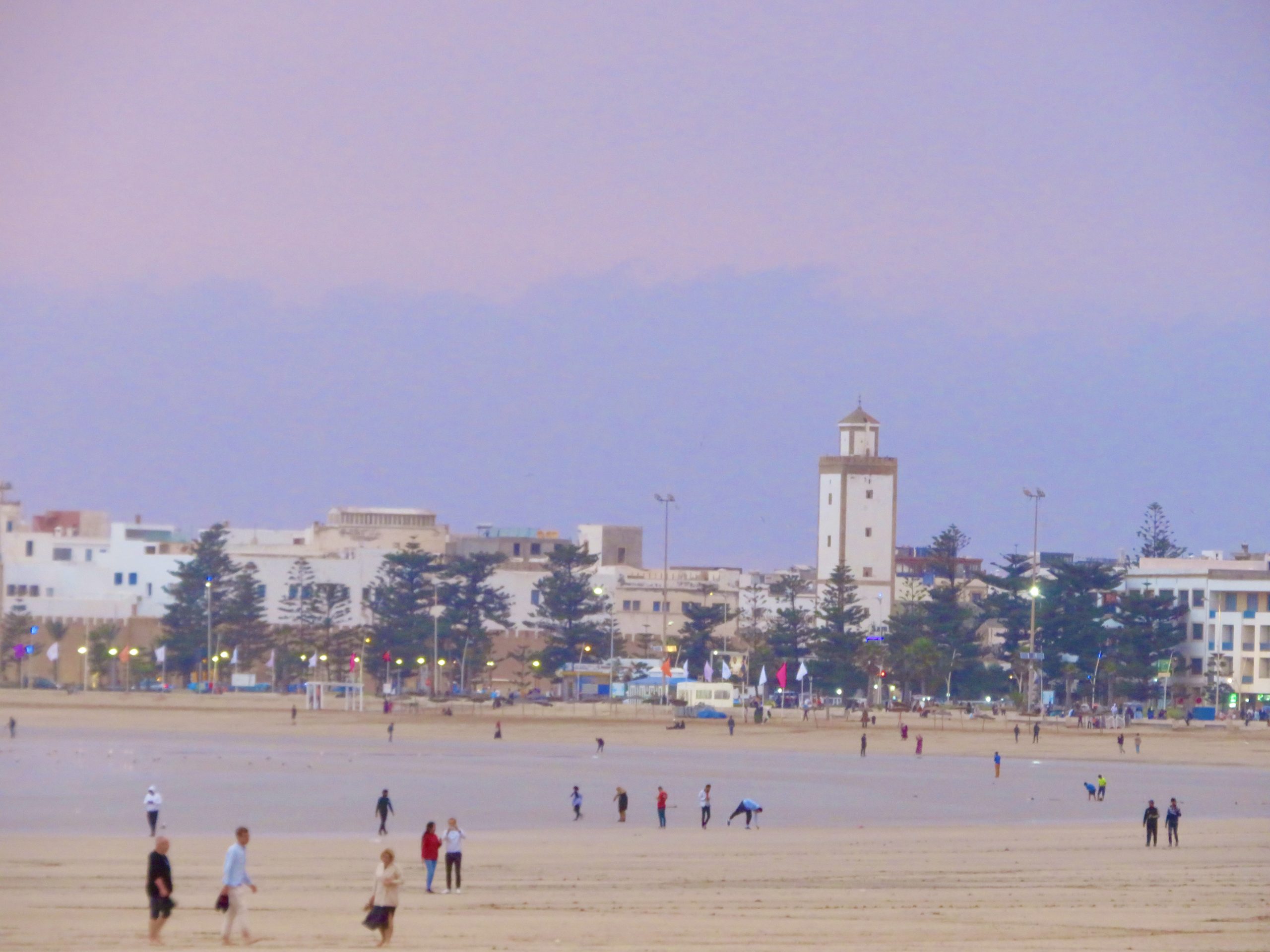 Essaouira is one of the best places in Morocco for all these activities. With great wind and currents, kite surfing and surfing are popular all year round. There are plenty of schools offering lessons up and down the beach with Essaouira Beach Hostel being highly recommended.

The 18th century city walls surround the city, giving protection ot the Medina and old city. Recently they have been seen in Game of Thrones, adding to their popularity. 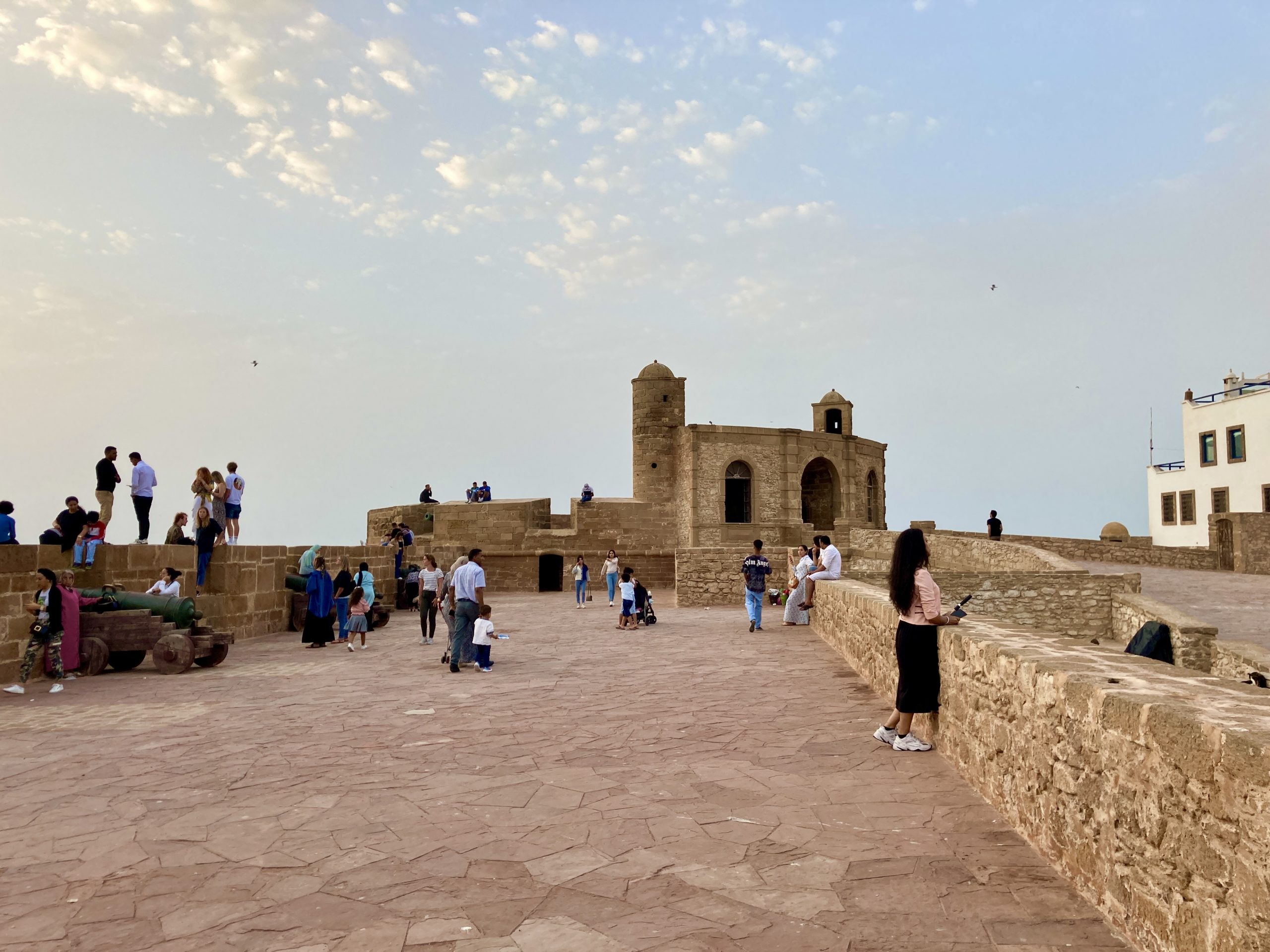 The narrow streets of Essaouira still retain their charm of selling local handicrafts, argan oil and containing plenty of great little restaurants. A lot of the buildings are over a hundred years old and still have smell doors and original decal on the fronts. Remember to take a look up every so often to see the colourful, often blue, window shutters dotting the city. 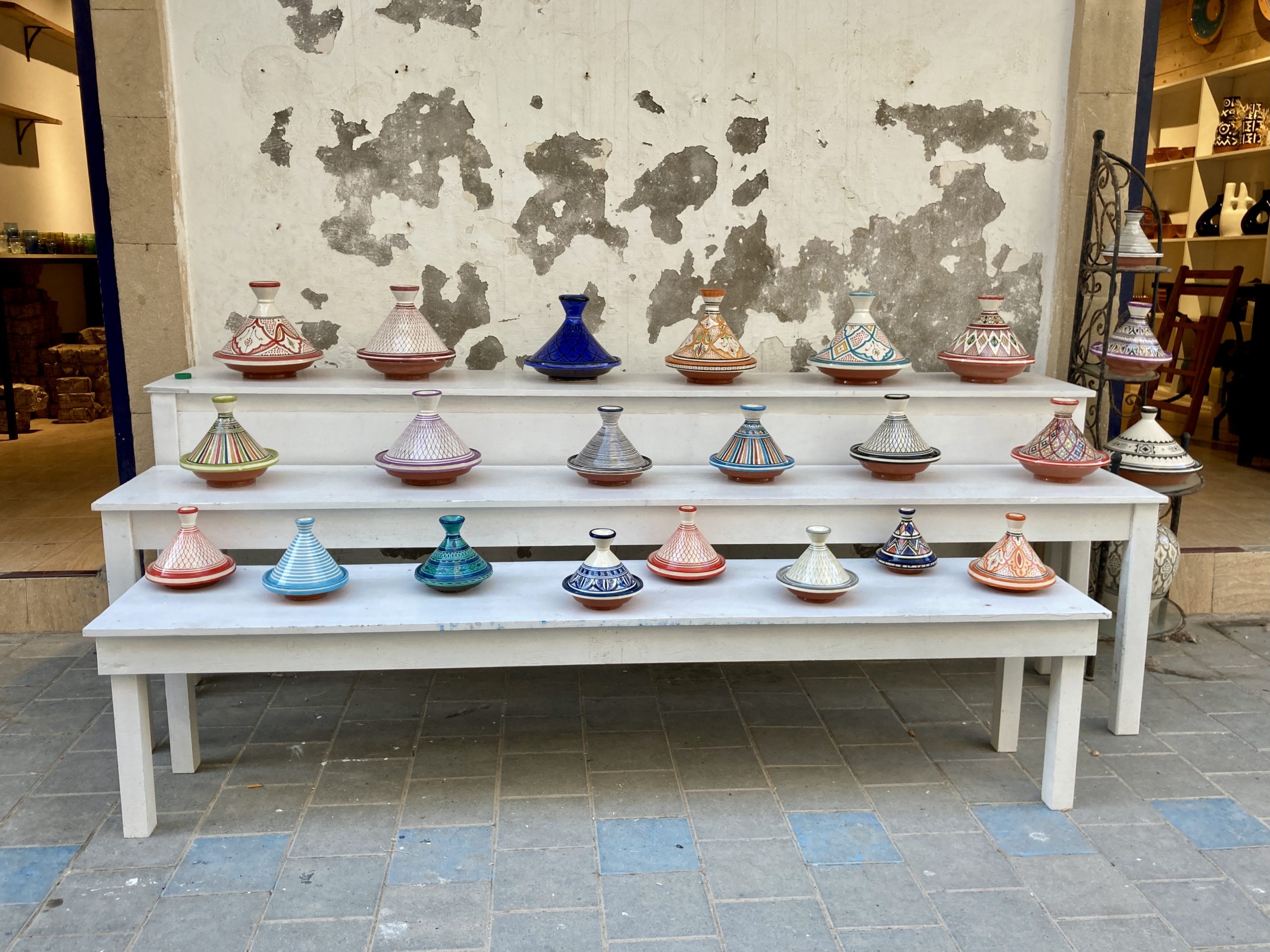 Do a cooking course

I love taking cooking courses when I travel and the one I did in Essaouira with Abdou from WeLoveEssaouira is one of the best I’ve done.

Starting in the market of the Medina, we bought our ingredients before heading back to his place to cook a very tasty and very traditional tagine. The food and flavours were amazing but just sitting and talking to Abdou was also a highlight of the tour. Highly recommended. 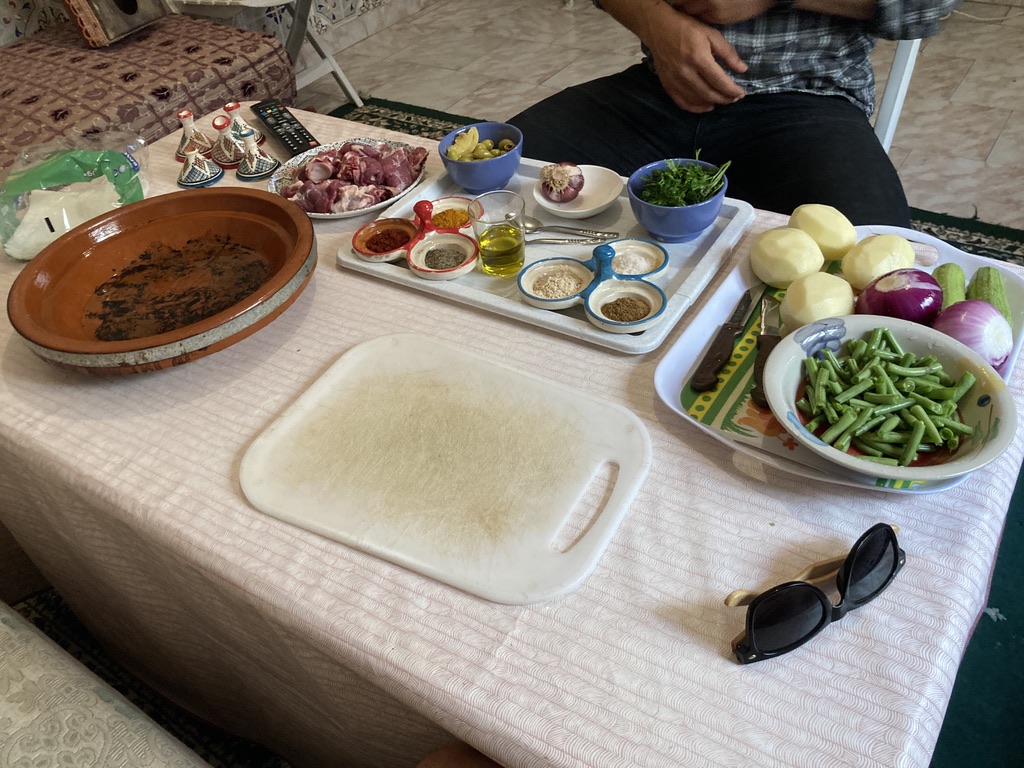 Walking tour of the city

There are a few walking tours of the city available that will take you to some of the areas that you may not feel comfortable walking down by yourself. Going into the small courtyards of some riads, the far corners of the markets and trying traditional tea and herbs and seeing the synagogue in the city were highlights. Various tours can be found on AirBnB experiences, or GetYourGuide. 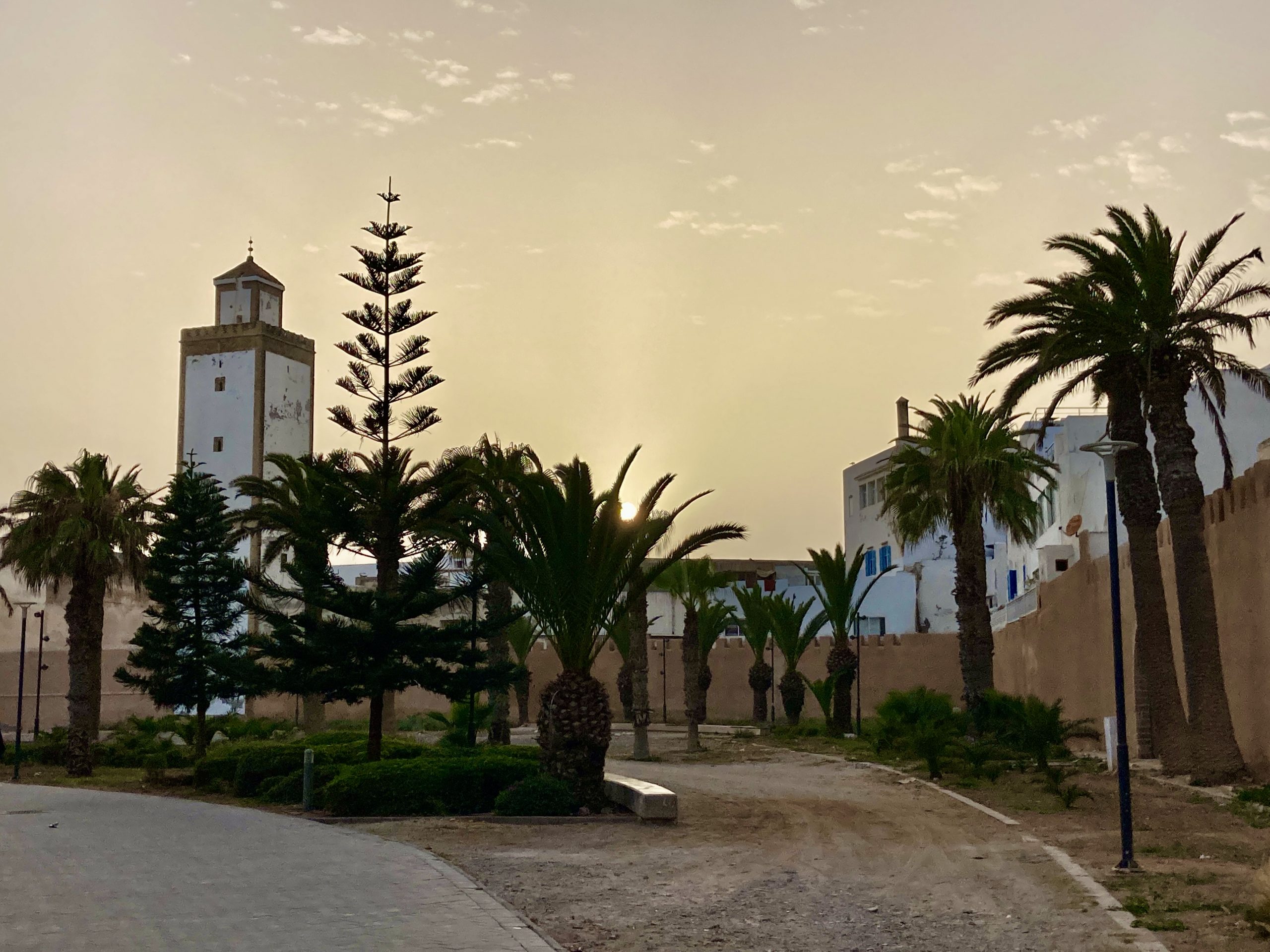 Despite its small size, the harbour at Essaouira is one of the busiest and most productive in Morocco due to a quirk of the ocean currents on the West African coast. Feel free to wander around the harbour and even purchase fish from the small stalls that have popped up all over the place. Once you’ve bought the freshest fish of your life, there are others in the port that can descale and debone it for you, before heading to a select few restaurants who can cook it up. 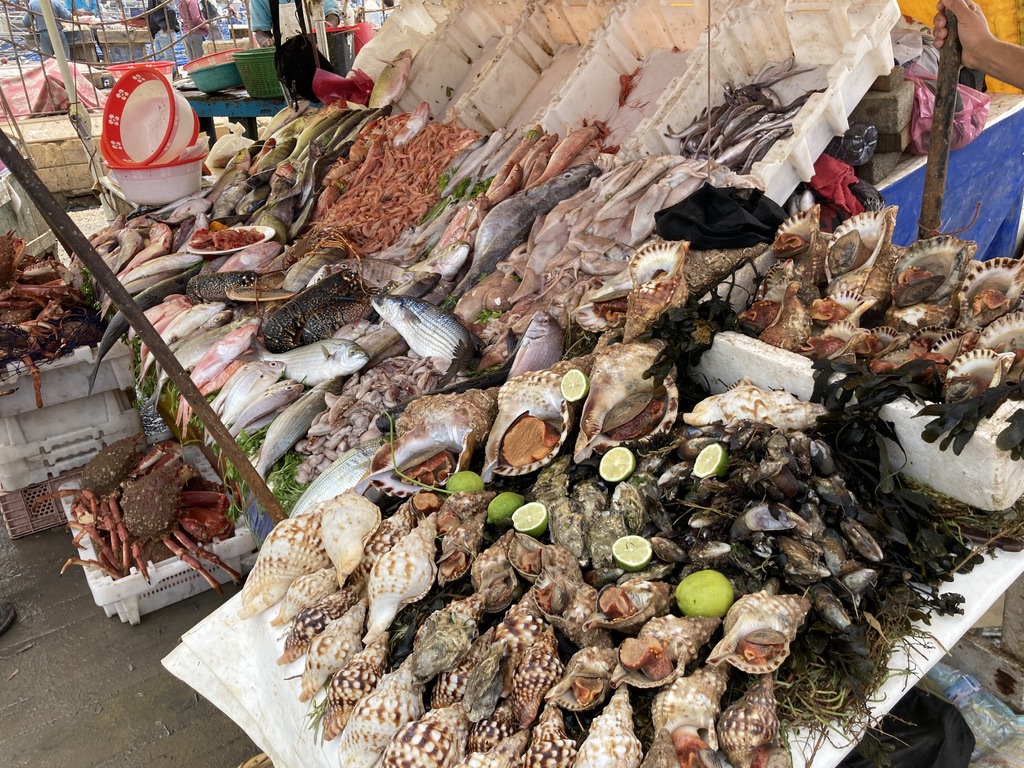 Is Essaouira worth visiting? Definitely!

It has a little bit of everything so you are bound to find something to do. Getting away from the heat and bustle of Marrakech to Essaouira will make you see a different side to Morocco, just like the locals do. A few days will give you the chance to see the highlights of Essaouira but it is a great place to settle for a bit longer if you want to take in the relaxed vibe.