Getting from Kuala Lumpur international airport to the city centre can be done a number of ways depending on how much time you have and your budget.

Which Terminal at Kuala Lumpur International Airport Will You Fly Into?

KLIA2 is for budget airlines. Any flights with Air Asia or the multitude of other budget operators from South East Asia will arrive into KLIA2.

For train and bus options, KLIA1 and KLIA2 are simply one stop apart.

In pre covid times, there were two different types of train that would take you from KLIA to KL Sentral in the city centre. Since then, they have combined the service and now run as one. Right now, taking the train from Kuala Lumpur Airport to the city centre is the quickest option.

The KLIA Transit used to be the slower of the two trains having more stops but being slightly cheaper. This has now been combined with the newer, faster KLIA Ekspres

The KLIA Ekspres runs every 20 minutes, between 5am and midnight with frequency increasing to every 10 minutes during peak hours during weekdays only. A one way ticket costs RM55 (£10.20/ $12.50USD) for adults and RM25 for children, return tickets are RM100 and RM45 respectively. They can be bought at the ticket counters down stairs from the airport or using the self service ticket machines next to the counters (the self service machines only accept card).

The trains are air conditioned, comfy and fast. The journey time from KLIA1 to KL Sentral is only 35 minutes (add another 5 minutes if departing from KLIA2).

For those travelling to other destinations throughout Malaysia, the train also passes TBS (Terminal Bersepadu Selatan) the main bus station in Kuala Lumpur that has bus services that go nationwide.

From KL Sentral its easy to get public transport from all the other bus and train services to almost anywhere in Kuala Lumpur.

It’s easy to find the KLIA Ekspres station in Kuala Lumpur International Airport. Leave arrivals and follow the bright pink signs with KLIA Ekspres on. Keep going down the escalators or in the lift into the basement floor of the airport until you see the ticket barriers.

There are a variety of bus companies that have services from Kuala Lumpur Airport to central Kuala Lumpur. This is bar far the cheapest way of travelling between the two with prices as low as RM12 (£2 / $2.70USD) for the journey. However, it is also the slowest of all the options with the bus taking around 1 hour but potentially as long as 90 minutes in heavy traffic.

Buses can be found inside both terminals. Depending on the bus companies, tickets can be bought at the counter inside the airport or from the bus driver on board.

Also be aware that the different companies can stop at different places in the city. Whilst some may drop you at your hotel, others take you to KL Sentral and other depart from Pudu bus station, a great option for backpackers or anyone staying close to Bukit Bintang.

(If this is your first time taking a bus in Malaysia, you’ll get to experience how colourful all the buses are! No boring plain white buses in this country!) 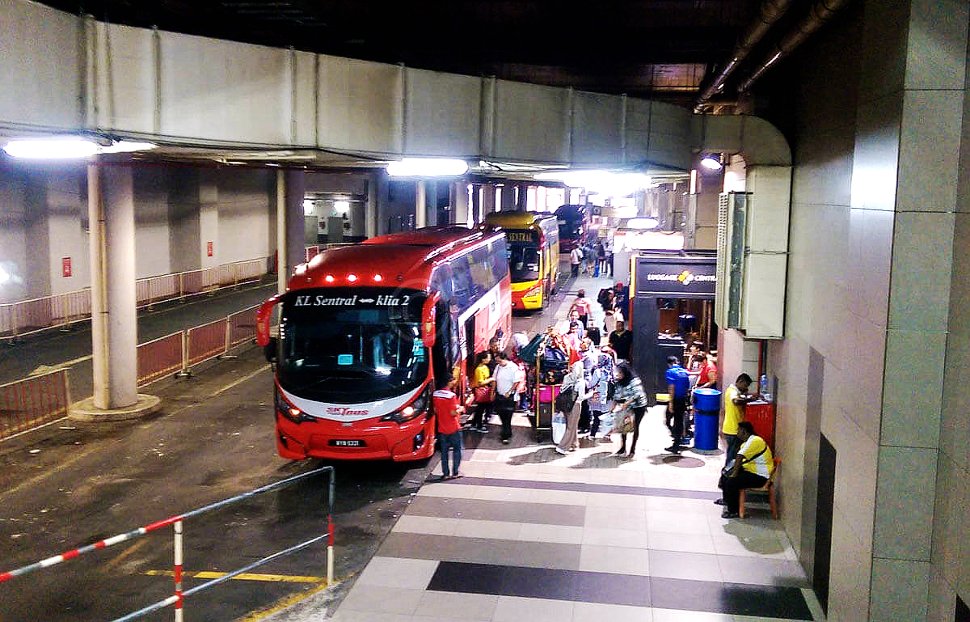 Like any international airport, taxi’s are waiting just through the terminal door. These red and white taxi’s should always be on the meter. This is likely to be the most expensive way of travelling from Kuala Lumpur airport to the city and isn’t necessarily the quickest with a journey time still approaching an hour. It will however, drop you directly at your door.

A much better options would be to download the Grab app with a local sim card (which can be bought inside the airport) and book a taxi.

Grab is the taxi app of choice in Malaysia as there is no Uber. Prices vary depending on the time of day but they start around RM65 (£12.50/ $15USD) in quiet times and takes aroud 50 minutes to KL Sentral with little traffic but can take up to 90 minutes at peak times. Other destinations in KL will obviously take different times. Although more expensive that taking public transport, a Grab will drop you at your door and may work out cheaper if you can split the costs if you are travelling with others.

There are several car hire companies from Kuala Lumpur airport, however, unless you are an extremely confident driver and have experience driving in major cities in South East Asia, I wouldn’t recommend hiring a car. Public transport provides but cheaper and easier options to get to the city centre.

With public transport so cheap and accesible in Malaysia, I don’t know of anyone that has driven or taken a road trip around Malaysia. If you know of someone that has done this I would love to know more!

As you can see there are a variety of options to get from Kuala Lumpur International Airport to the city centre. The best for direct door to door travel would be to book a taxi through the Grab app. For those on the tightest of budgets, taking a bus to either Pudu or KL Sentral would be the best option but can take the longest at peak times. The sweet spot of taking 35 minutes for RM55 makes the KLIA Ekspres train the option I always take.