How to Get to Bimmah Sinkhole, Oman – Perfect Itinerary

Bimmah Sinkhole is definitely a must see when visiting Oman. If this was in a more popular country, the tourists would be queuing out the gates!

But luckily, Oman is still considered an off the beaten path destination, so there are few people at Bimmah Sinkhole. The only people I saw were a few local lads looking to jump in and a family having an evening swim.

The natural rock formations make not only a beautiful photo location but a great place to dip your toes and cool off after a warm day exploring the rest of what Oman has to offer.

But how do you get to Bimmah Sinkhole? Unfortunately public transport isn’t great in this part of the country so you’ll need some other ways to get there.

If you’re wondering what’s the best way to get to Bimmah Sinkhole keep reading!

What Is The Bimmah Sinkhole?

More modern scientific evidence suggests that the underlying limestone dissolved causing the rocks above to collapse in on itself creating the large sinkhole that we see today. 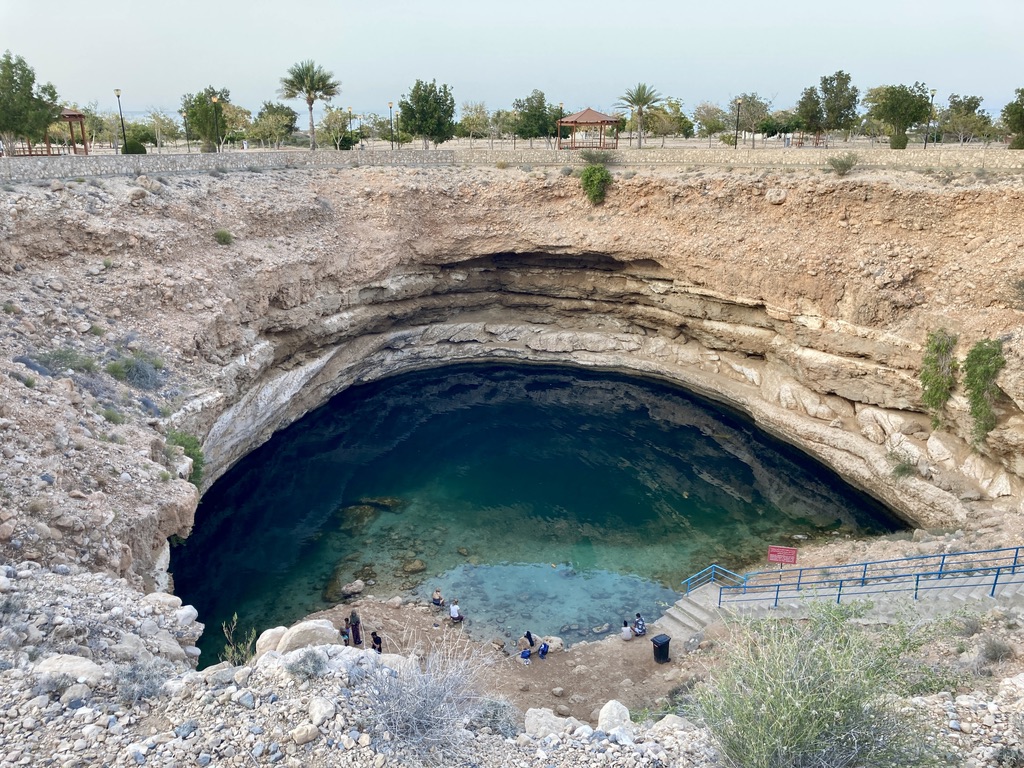 Where is the Bimmah Sinkhole

Bimmah Sinkhole is about 90 minutes drive south of Muscat. The actual distance from Muscat is about 125km. It can easily be seen as part of a day trip from the capital or as part of a longer road trip that also takes in Wadi Shab and onwards down to Sur. I actually visited the sinkhole on my road trip leaving Sur and heading back to Muscat.

How to Get to the Bimmah Sinkhole from Muscat

From Muscat, follow route 17 south until you see signs for Dibab. The road is well paved and has beautiful views as it heads over hills and close to the sea. At this junction, you’ll come off the highway, swoop under the road and follow a coastal road for a few hundred metres. You’ll see signs for the sinkhole just before the turning.

Note: The name of the park the sinkhole is in is Hawiyat Najm Park and is also on a lot of the signs.

There is no public transport from Muscat to the Bimmah Sinkhole. Buses pass by on the way to Sur but do not stop near the sinkhole.

From Sur to Bimmah Sinkhole is about an hours drive. You’ll also have the opportunity to stop at Qalhat, Tiwi and Wadi Shab as well. All of which are well worth visiting. Wadi Shab and Bimmah Sinkhole can easily be visited in the same day as part of a tour from Muscat or by yourself.

Follow route 17 north until you see signs for Bimma or White Sand Beach and come off the highway. Head towards the coast and then turn left, following the coast north. Follow for another 10km or so until you see the signs for the sinkhole.

Again, there is no public transport options on this route.

There is plenty of parking at the sinkhole and some signs allowing you into the park that surrounds it. The park is open from 8am to 8pm daily and the friendly security guards will say hello as you go in. There are some toilets just inside the entrance if you need to get changed into swimwear.

The grounds surrounding the sinkhole are beautiful with palm trees, flowers and grassy areas making it seem more like a city park than a tourist attraction miles from anywhere. The paths and the park are very well maintained with a few benches and some bins which would make it a nice place for a small picnic.

A short walk from the entrance is the sinkhole. At the far end is some steps leading down to the base of it.

It is possible to swim in the water at the Bimmah Sinkhole but be respectful of local laws. The few local women I saw were fully clothed in the water. Younger males can get away with being topless if they are wearing longer shorts. As always, follow what the locals do.

The water is crystal clear and beautifully refreshing. Apparently it is 30m deep at the far end from the stairs.

Although there are signs strongly discouraging it, I did see some local boys climbing over the walled area and jumping the 20m into the sinkhole. For those that know me, you’d be unsurprised to know that I didn’t follow them.

If you stand in shallow waters for long enough, small fish will come and nibble away at the dead skin on your feet and toes similar to what is found in spas in other country’s or in UK shopping centres 15 years ago. 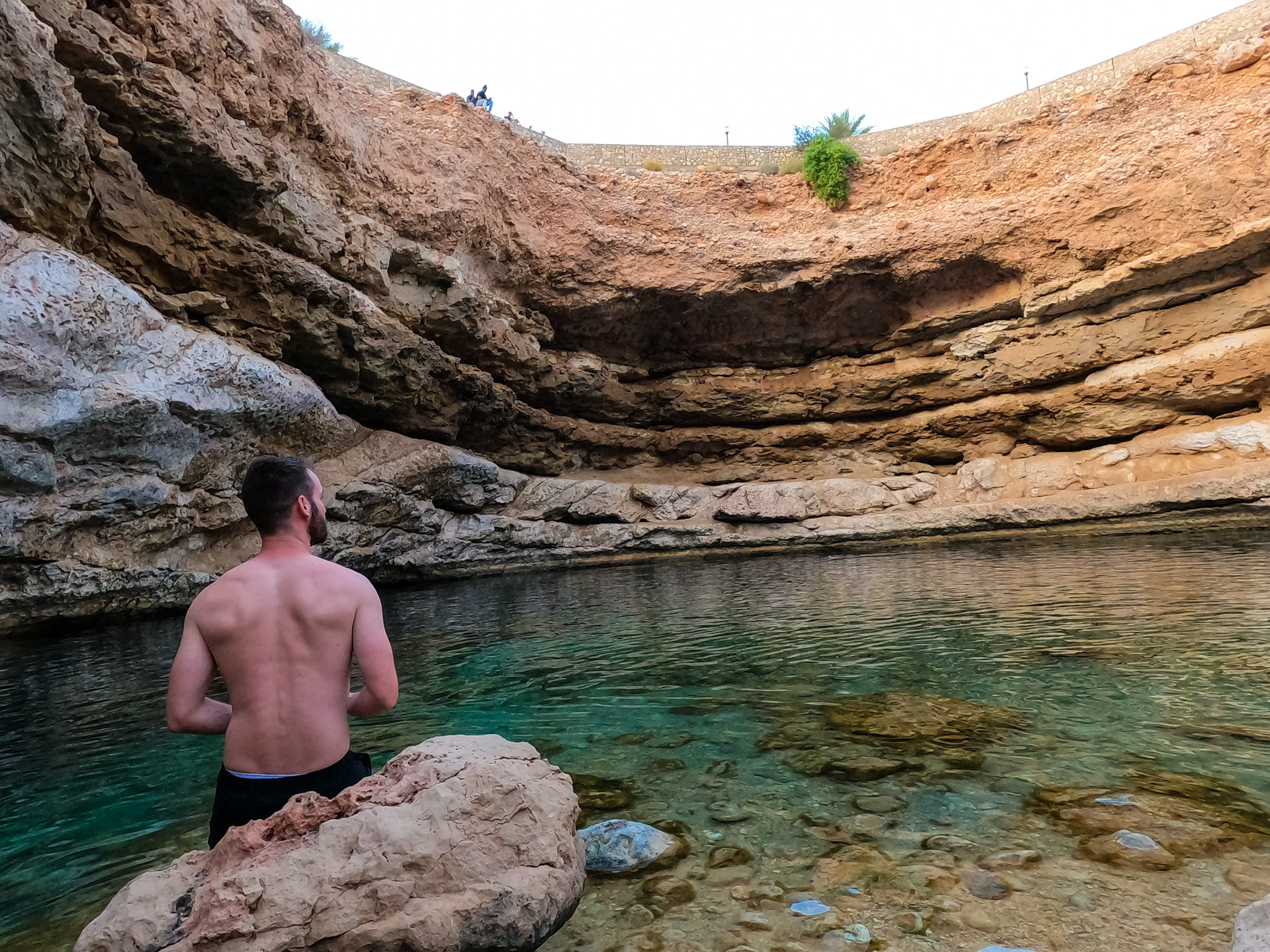 What is the Best Time to Visit the Bimmah Sinkhole

As with most sites around the world, it would be best to visit first thing in the morning. The park opens at 8am. At midday and early afternoon, the sun and heat would be too intense to enjoy it properly, but your clothing would dry in seconds.

I actually went in the evening. It had cooled off but the sun disappeared behind the mountains early and plunged the park into shadow just after 5pm. If you’re into photography, the light is pretty poor and the colours of the water don’t come out in your photos. There were a lot of people leaving when I arrived so expect it to be busy around 4pm.

Including spending time in the park and swimming in the sinkhole, I was there about about an hour. 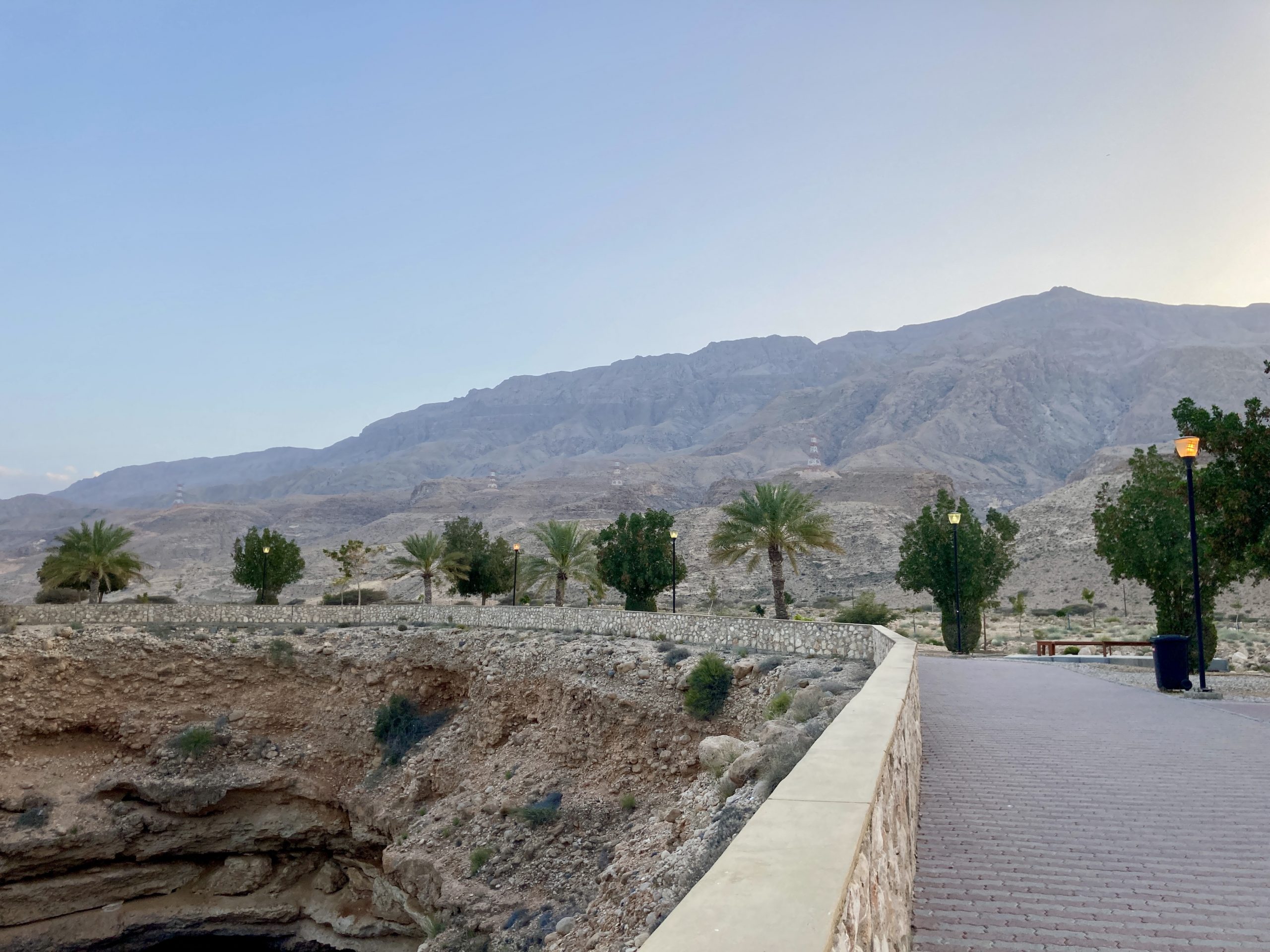 How to Get to the Bimmah Sinkhole – Important Points to Know