Oman has been on my list of places to go for a very long time. A beautiful country with incredible nature and friendly people, there are plenty of reasons to want to visit. When I found myself in Abu Dhabi, I thought it would be the perfect time to make the visit across the border. However, one thing I found was that Oman was NOT a budget destination.

Getting to and from Oman

Direct flights can be found on Omans national carrier, Oman Air, to many major cities in the middle east, Asia and Europe, but these are likely to be the priciest option around! Budget airlines from the UAE such as Wizz Air Abu Dhabi and Fly Dubai both fly to Muscat for cheaper deals. Salaam Air, an Omani budget carrier also flies from many cities in the Middle East and central Asia but are normally more expensive than Wizz Air. The absolute cheapest way to get to Muscat would be a bus from Dubai. Prices start at 55AED and the journey lasts approximately 6 hours. 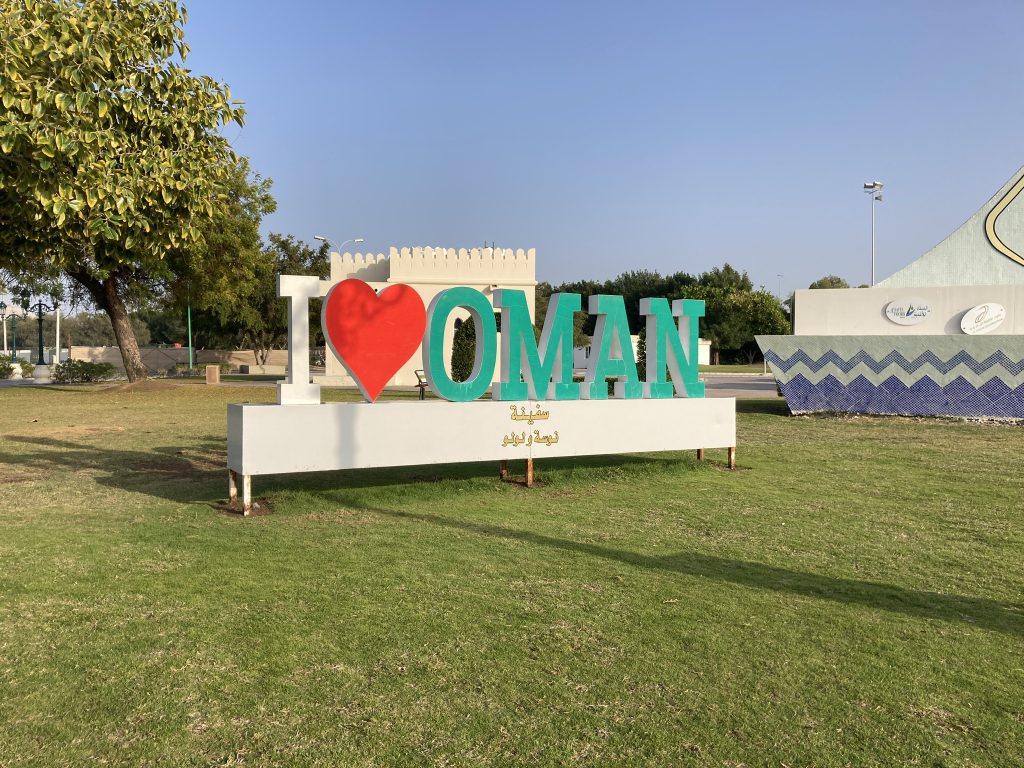 Cheapest way of getting from the airport to the city

The cheapest way of getting from the airport to central Muscat and your accommodation, I recommend getting the local A1 bus that goes directly through Muscat on the main highway all the way to Ruwi. This costs 500 Baisa. Get off when you get close to your accommodation, then order a taxi to take you the rest of the way. Taxis were a lifesaver and really the main option to mode around the city if you won’t have a car.

Unfortunately, like a lot of cities in the Middle East, Muscat is not a walkable city at all. The most I managed to walk was one or two blocks before the pavement ran out and I hit a main road. You would think that in this situation, public transport would be abundant but unfortunately that isn’t the case. Mwasalat do have buses that criss cross the city but timings are unreliable and they aren’t frequent. Then bus route outside my hotel only ran 12 times per day at sporadic times. When I did see the red Mwasalat buses, even though they were only 20 seater minibus style, they were almost always empty.

Download the OTAXI app and you’ll never be waiting more than a few minutes for a ride. Rides start at 1.5OMR and cover a fair distance for that price. Most journeys under 10 minutes will be 1.5OMR. The most I paid was for a 25 minute journey to the airport for 4.7OMR.

You cannot get an OTAXI from the airport to the centre. They aren’t allowed to operate so regular taxis on the meter are the only option. 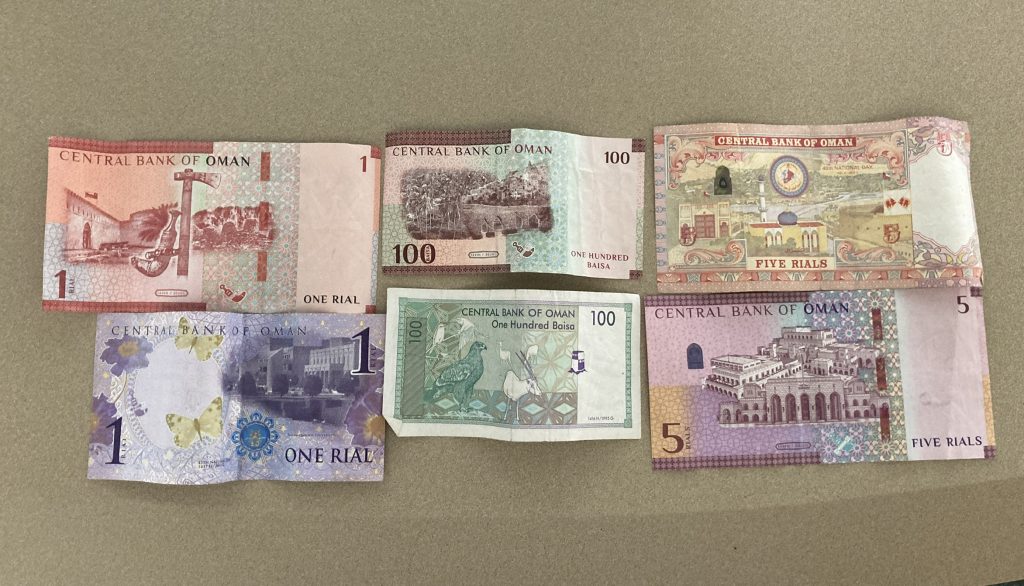 Long distances buses, run by Mwasalat and a few other companies are options for travelling around the country if you have plenty of time and loose plans. Many destinations only have buses running once or twice per day and will drop you away from the town or city centre.

Hiring a car is a great option in Oman but it may not be the cheapest. There are some cheaper options from local companies in the city however I found that many of them had very strict kilometre limits on them.

I went with an international company based out at the airport, which despite having a higher up front cost, was more beneficial in the long run.

Looking to travel around the rest of Oman? Check out: Top 12 Things to do in Muscat and Oman

I normally stay in AirBnBs but for the quality available, I didn’t think they were worth what they were changing. There are no hostels in Muscat either.

I found a cheap hotel at Muscat Dune Hotel which was perfect for what I needed. It’s on a main road with lots of food and drink options close by. It even has a pool and gym on the top floor. This was by far the best value accommodation I found in Muscat.

Food is one of the more affordable things in Oman. Portion sizes of local dishes are so big, I was often eating just once per day which kept my food budget low. Whatever you order will come with a side salad, often some bread and hummus and a very large plate of rice. For more affordable options, Indian food, biryanis in particular, and Arabic/ Turkish shawarma are filling and cheap. Next to my hotel was a Lebanese shop that did a shawarma for 600 baisa. Food courts in the shopping malls often have great choices but with their western menu comes western prices, and then some. Bargains can be found but it will take some effort. If you’re feeling lazy, Talabat is the main food delivery app that always seem to give you offers. Meals can be delivered to you for 2-5OMR. 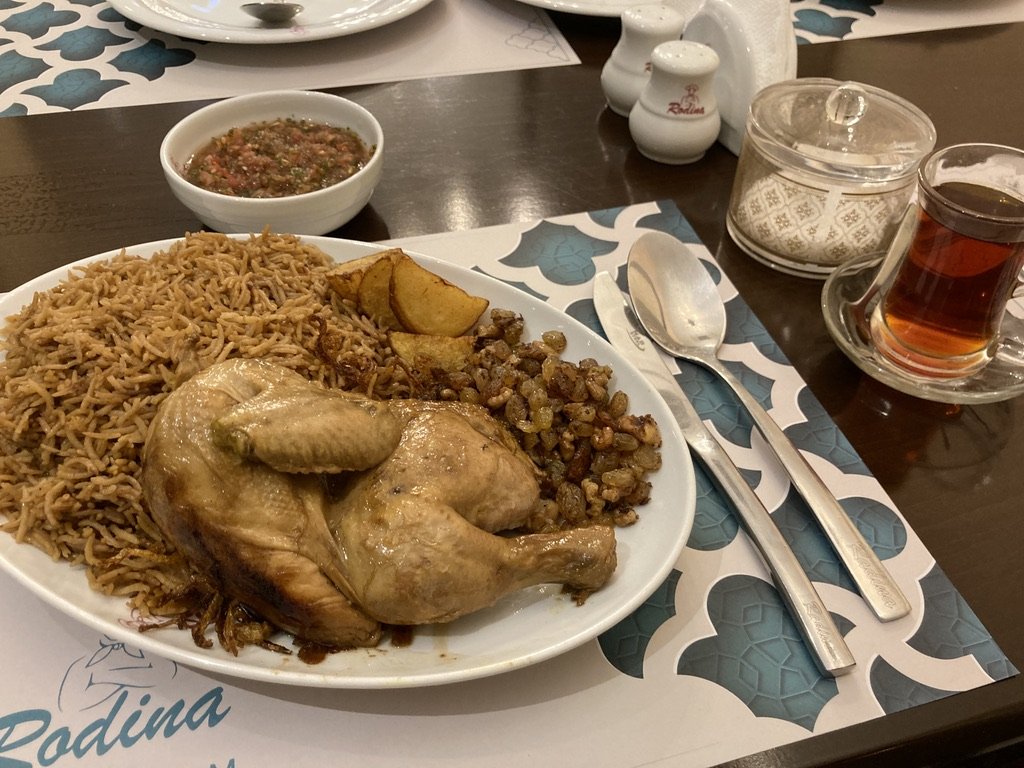 The 8 Best Cheap or Free things to do in Muscat

If it has grand in the title you expect big things but after heading here you won’t be disappointed and is definitely the best thing to see in Muscat. Built in the 1990’s, and finally opened in 2001, this is the largest mosque in the country. It had many more records until the Sheihk Zayed Mosque in Abu Dhabi opened, but that doesn’t mean it’s a reason to skip it. Make sure you go between 8-11am as it is only open to worshippers outside of these times. 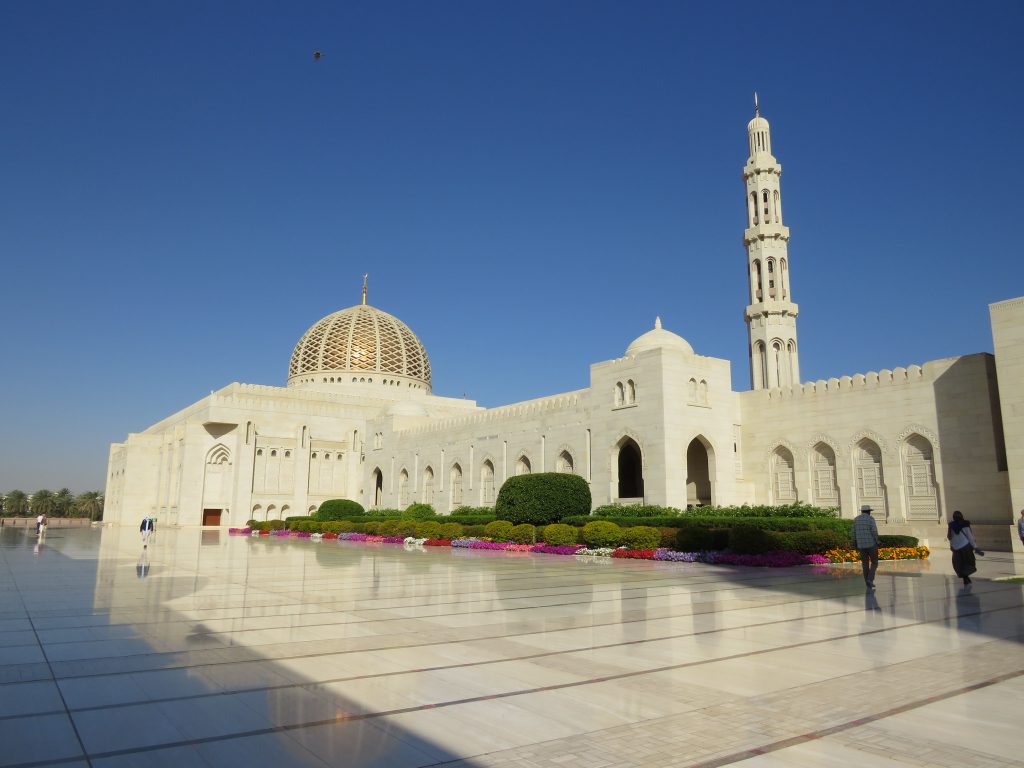 Like in most countries, I like to go to the National Museum as it often gives the best over view to the country you’re in. The one in Oman is located near Mutrah in the east of the city and has a variety of collections explaining Oman’s history as being at the focal point of trade in the Indian Ocean, how their tribal system worked and the influence of Islam. 5OMR, 2 hours max Al Alam Palace As you walk out of the National Museum, keep walking in a straight line to see the beautiful Al Alam palace. One of the six homes of the Sultan of Oman, this royal residence is still used for official state visits and where heads of state and royalty stay during their visits to Oman. You can’t tour the grounds or go inside but it is still an impressive building to view from the outside.

Standing proud at the end of the Mutrah corniche, Mutrah fort has been standing for nearly 450 years since the Portuguese built it in the 1580’s. Whilst the information inside may be limited to tourists, the old cannons will be interesting to history buffs, but main attraction here are the sweeping views across the Mutrah habour and Muscat port. You may also be able to see the personal ship of the Sultan of Oman which is often docked in the middle of the port like a grand cruise ship.

Just behind Mutrah Fort, in the hills of the mountains, is a short mountainous hike that will take you east along the coast to Riyam Park. The hike will only take 30-45 minutes but is worth it for the view of the hills and sea that you get at the peak. Muscat is not a very walkable city so it may be one fo the few chances you will get to stretch your legs in nature!

5. Mutrah Souq and Corniche – Free to walk around

This area is one of the most pleasant in the capital. Set along the natural bay that used to be Omans main harbour, the Mutrah Corniche now has an abundance of good restaurants and coffee shops along with some small souvenir stalls.

Head in to Mutrah Souq for a chance to walk around on of the oldest souqs in Oman. Being close to the old port, it has been a hotbed of trading for centuries and still has a wide variety of Omani and Indian goods. Be aware that there is very little open on the weekends (Friday and Saturday). 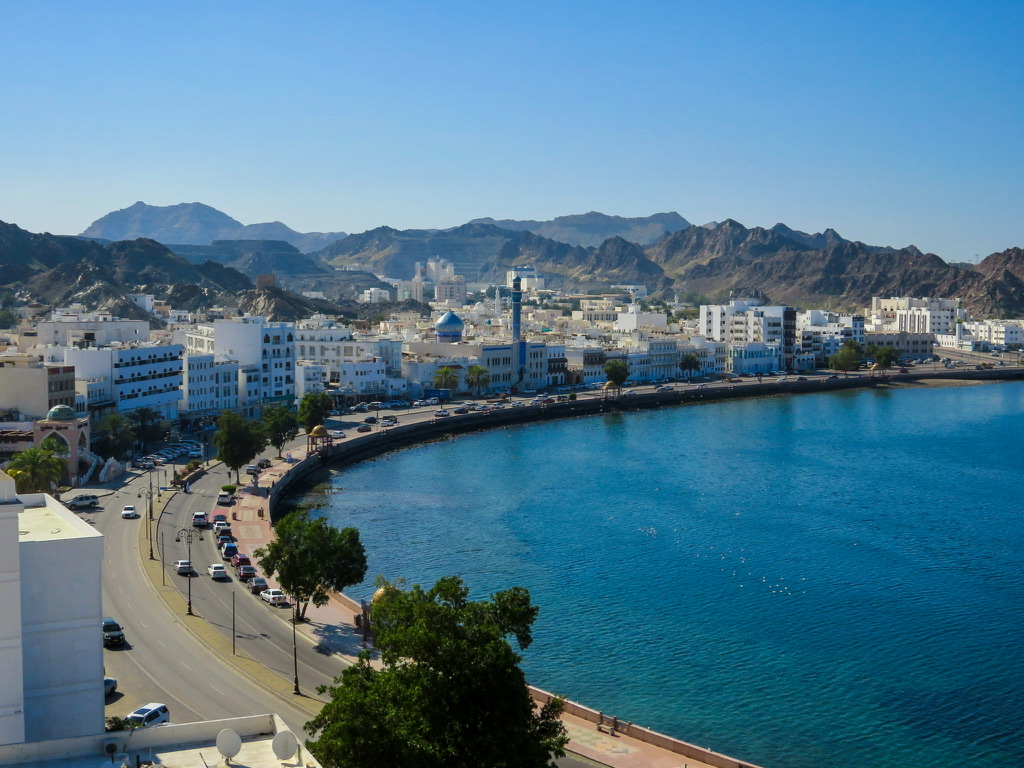 If you’re looking to go shopping in Muscat, there are plenty of shopping malls located throughout the city. Even if you aren’t looking to part ways with your cash, it can be a fascinating place to people watch as families go about their daily lives. Each mall I went to also had a section that was devoted to local Arabian good such as jewellery, clothing and perfumes which make you want to stick around more. Honorable mentions must go to the Oman Avenues Mall and the Mall of Oman.

Looking for more malls in the Middle East? Check out: What To See and Do in Manama, Bahrain (Travel Guide)

Being a coastal city, Muscat has plenty of beaches dotted up and down the length of the city. Come evening time heading to the beach in Muscat is a right of passage for locals! These are the place to be as Omani’s come after work to exercise, relax, have BBQ’s or even just to hang out with friends. Some of the most popular are Qurum Beach, Azaiba Beach and Muscat Beach.The Seeb beach is also worth a mention if you’re in that park of town. 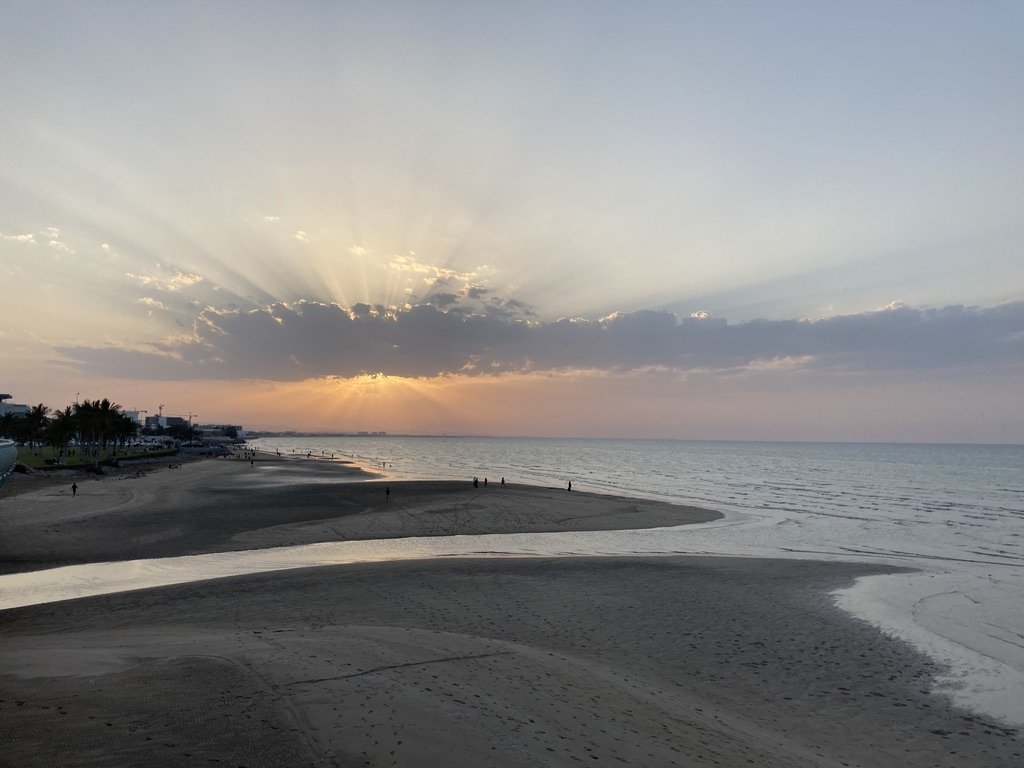 Along with the beaches there are a few parks in Muscat, but again, don’t expect anyone to show up until nightfall. I went to Qurum park around 4pm and had the place to myself until the sunset just after 6 when it started to become busy with locals.

It may not be the cheapest destination but Muscat can definitely be travelled on a budget. There are plenty of cheap and free things to do with affordable food and accommodation options. Tours can be expensive but if you are willing to forgo some comfort and convenience Muscat is a great option for the savvy traveller.