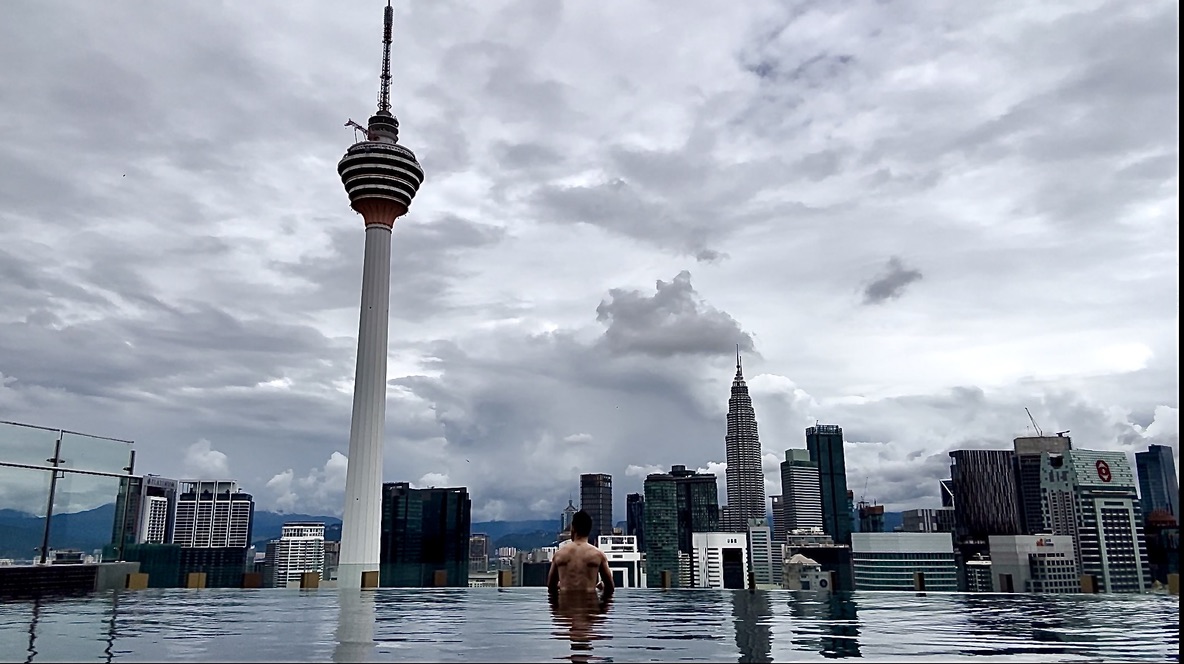 Going up the Petronas Towers

Going up the Petronas Towers in Kuala Lumpur is seen to be a must do when visiting the Malaysian capital. At one time the tallest buildings in the world, they are an icon of Malaysia’s economic growth heading into the 21st century.

In my previous times in Malaysia, I didn’t go up them. I had heard varying stories about having to queue up early and only going as far as the skybridge on the 42nd floor. I now know this not to be true.

Heading to the top of the Petronas Towers right now couldn’t be easier.

Tickets can be bought online for 80MYR (about £15/ $18USD) or adults and 33MYR for kids (about £6/ $7.50USD). Tickets are cheaper for Malaysian citizens with a MYKad card. Choosing a time slot is easy and tickets can even be bought up to three months in advance. An email ticket with a QR code is sent to you shortly after which you show at check in.

Tickets can also be purchased at the front desk on the day however there is often limited availability, especially around public holidays.

You can visit the Petronas Towers Tuesday to Sunday and book tickets for time slots between 10am and 5.15pm. There are special nightly visits for private groups operating from 6pm onwards costing 1200MYR. It is not possible to visit the towers as a tourist on Mondays.

Getting to the Petronas Towers is pretty simple. Firstly, at 450m high, they can be seen from almost anywhere in Kuala Lumpur. If you are staying close by, it is easy to walk to the Petronas Towers as many areas around it have excellent pavements (unfortunately, not everywhere in KL has this). If you get the chance to walk through KLCC park to the towers, you’ll enjoy a peaceful and relaxing stroll through grassland and pools rarely seen in urban jungles.

Using Grab is also an option. Grab is the taxi service app used across south east Asia. As Uber doesn’t operate in Malaysia, and as local taxi’s being notorious for not using their meter, getting the Grab app is a great way of getting around.

Taking the RapidKL to KLCC is another get option if you are near a station of close to KL Sentral. It’s only a short walk to the Petronas Towers from KLCC station.

The Petronas Towers are actually working offices of the state owned Petronas oil brand, and most of the lower floors are occupied by the Suria KLCC mall. Even with vague instructions on your ticket, it’s easy to miss the entrance to the tourist experience. When walking in from the fountains, you’ll have the Formula 1 cars in front of you. Turn left or right before you walk under them until you see the sign for the Twin Towers visit entrance and head down the escalators. 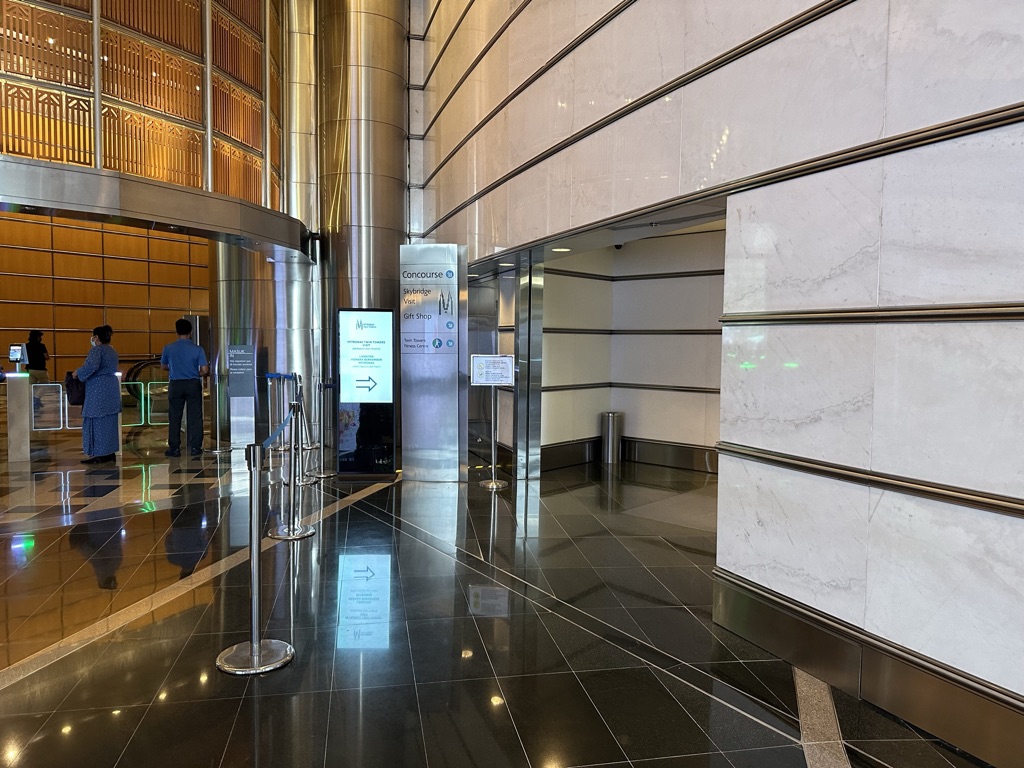 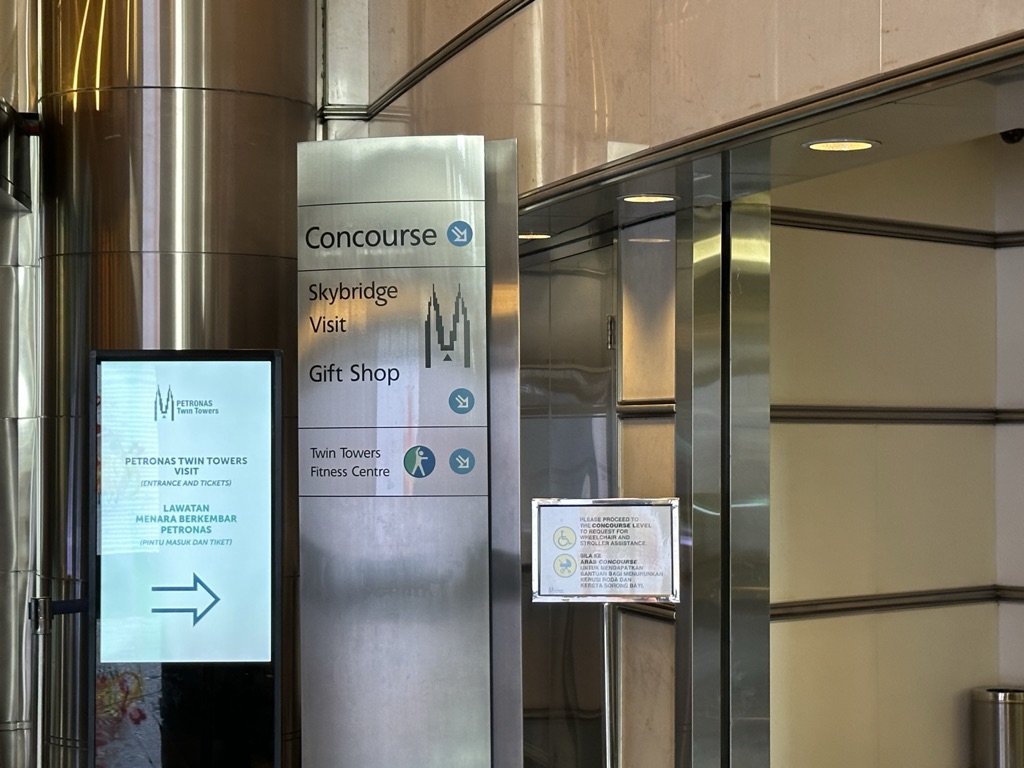 You can buy tickets there or if you already have a ticket that you have bought online, join the queue and go through the airport style security (although they didn’t want me to take my belt off for the metal detector…) and wait for a coloured sticker where your group will be taken up as one to the 42nd floor to experience the SkyBridge.

You’ll get to the SkyBridge and get to spend 10 minutes or so walking up and down and looking east and west across Kuala Lumpur. Whilst the view is good, it isn’t spectacular at this point. The SkyBridge and walkway can also seem quite crowded, especially if you’re looking for that perfect picture.

The group you’re assigned to will then get called and sent to another lift that will take you to the 86th floor, the highest you can go at the top of the Petronas Towers. The views here are spectacular as you would expect being 370m above the ground.

Except… the way the building is designed, you can only get views looking north and south at this point. The large room you are in in shaped like the number eight with windows looking both ways but with a bottleneck in the middle that has a model sculpture of the towers and some info on how it was built. When looking south, your view is partially obscured by the other tower but you can still see the KL Tower and Merdeka 118. Having all three buildings in one photo is actually an incredible sight. Although the views and the height are spectacular, it can just about give you 360 degree views if you go to all the far windows at the right angles. 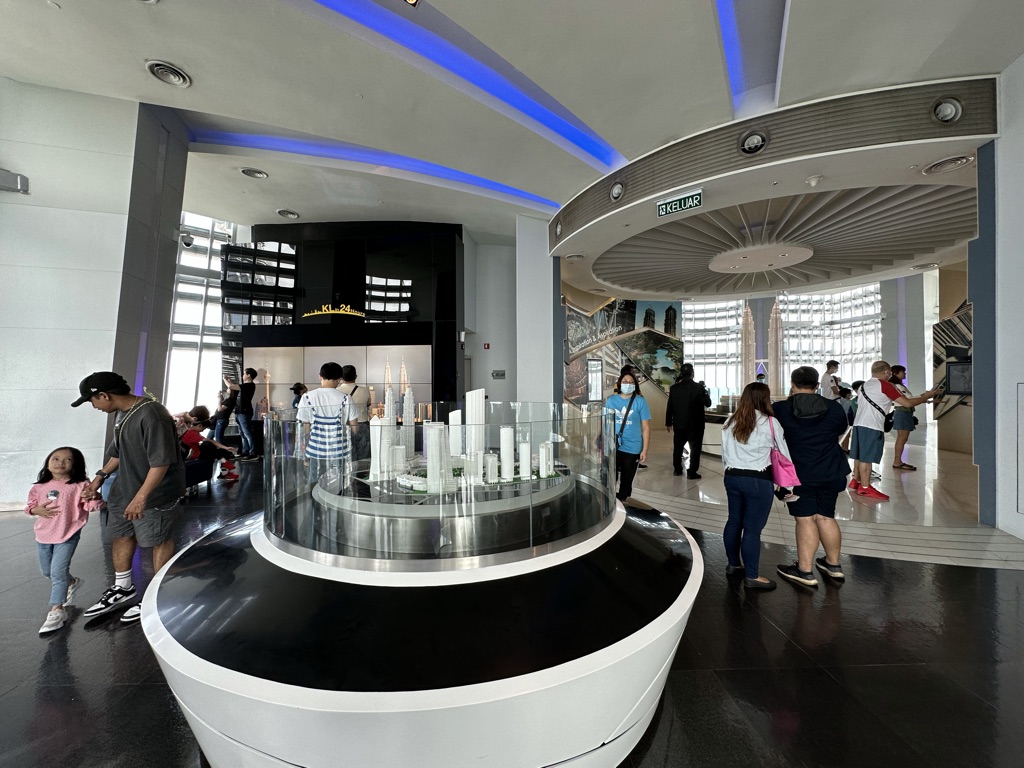 After another 10-15 minutes, your group will be called to go down another few levels to what seems to be a waiting area/ gift shop with more view points to admire the impressive architecture of the building that is now 25 years old. Even though my tour was full, the gift shop and the workers there seemed bored and had no interest in us and us in them. 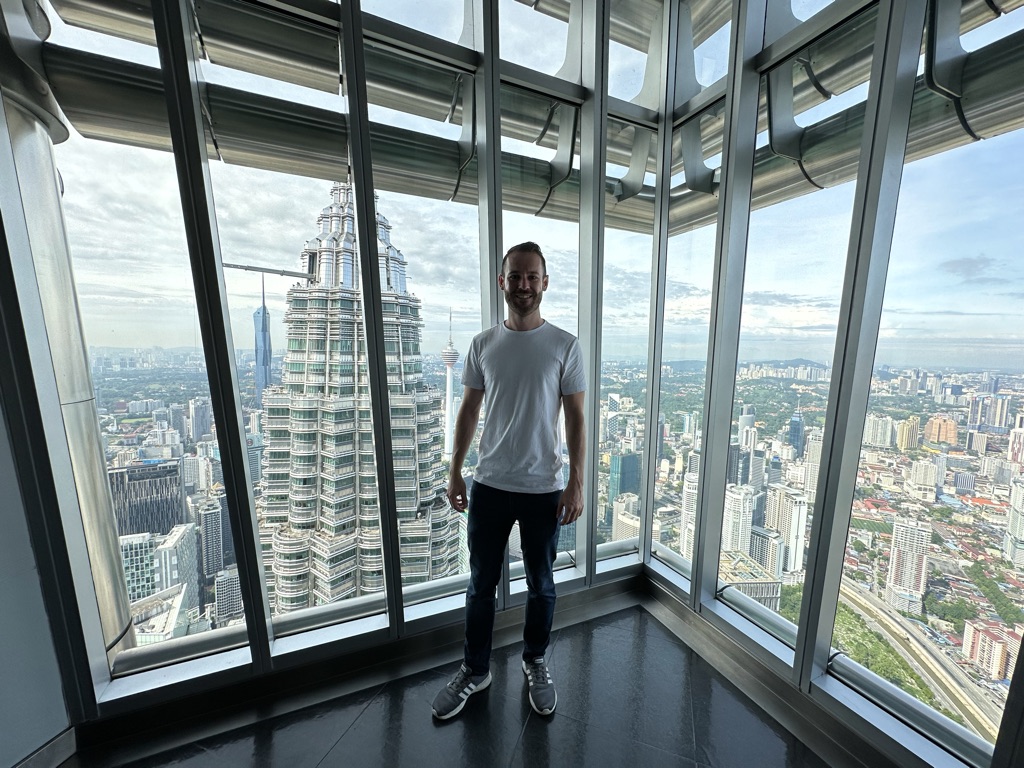 The group is called a few minutes later and then you are taken down to the bottom floor in the lift, led through another gift shop and back out to where you first entered. 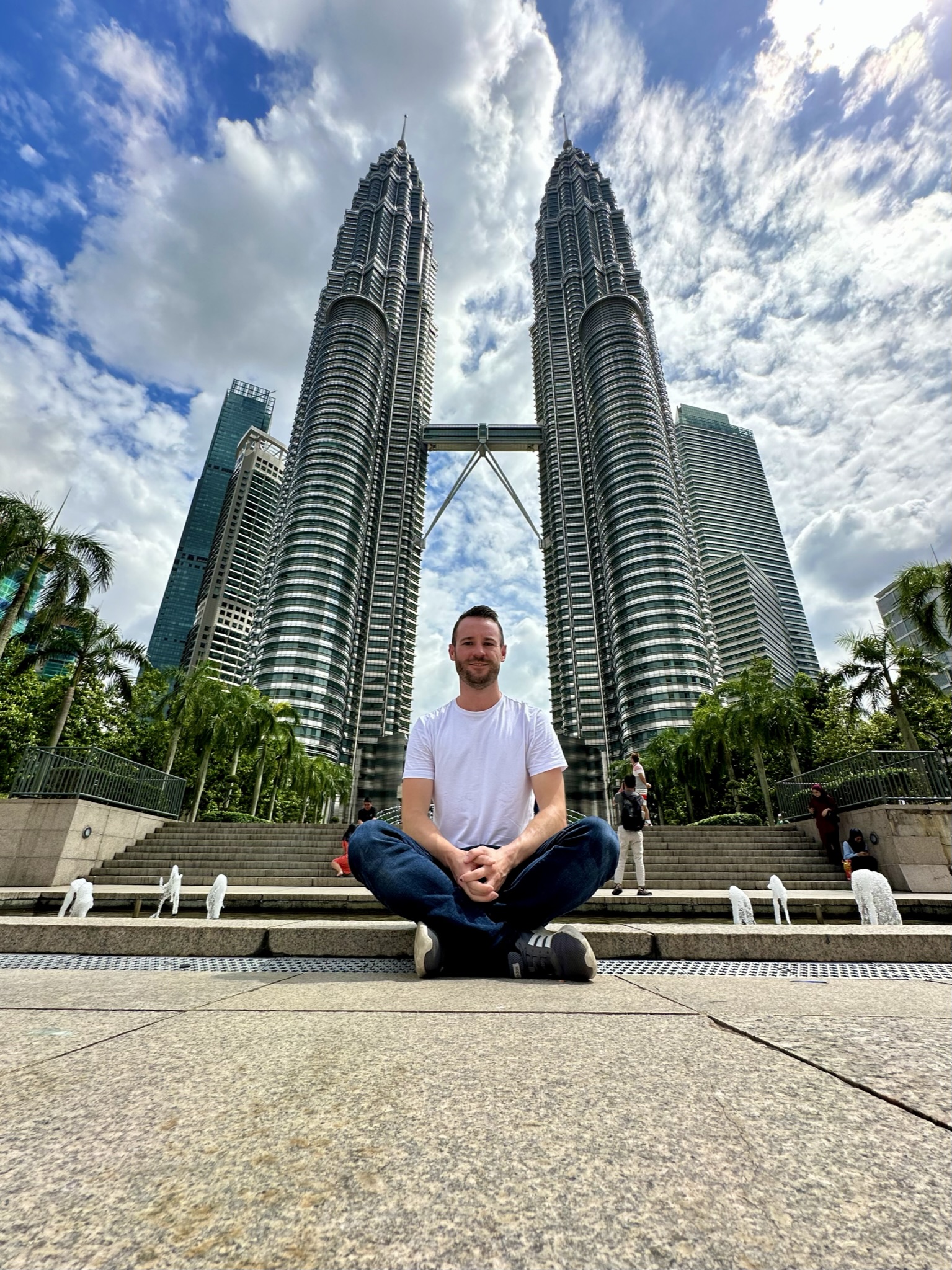 Going up the KL Tower

I have been up the KL Tower many times and it has always been easy to do, tourist friendly and affordable. The Menara KL Tower is built on a hill so it already has the advantage of being a few metres higher up in that respect compared to the Petronas Towers.

Another positive with the KL Tower is the variety of options available. For my first time up there, I actually went for afternoon tea, an affordable way to experience a revolving restaurant.

The revolving restaurant is now a part of Atmosphere 360, an entire restaurant concept 282m above the ground. Add on the hill it is built on and its actually on par with the Petronas Towers.

There are also other options to visit the tower which can make it a quick and easy way to see what Kuala Lumpur has to offer from a birds eye view.

Tickets can be bought online, but as of right now, the MenaraKL website is currently unavailable for booking. The entire website for the Menara KL is unfortunately pretty poor with lots of broken links and only shows some generic information on the building. There are a few other sites that allow ticket bookings but I would save your time and money and book direct when you get to the booking office.

The tickets can be bought from the ticket office for a trip to the Observation Deck and SkyDeck on the day. I have been up the tower 4 times now and I’ve never had to wait more than 15 minutes to get a ticket and get into the lift. I’ve never been to the SkyBox so I would recommend checking this out before you go. Be aware that the SkyDeck can be closed in times of inclement weather.

Unlike the Petronas Towers, the KL Tower is purely for tourists so is open from 10am to 10pm. This makes it a much better option if you want to be flexible with your plans or want to see the city at night time or for sunset.

The KL Tower is actually surprisingly close to the Petronas Towers. It is incredibly easy to walk between the two in just 15 minutes.

However getting to the base of KL Tower is only half the issue, from there it is then a 15 minute walk through the winding roads up the hill or you can wait for one of the tourist minibuses that will happily shuttle you up and down the hill for free. Be warned that the air con is cranked to the max on these buses! 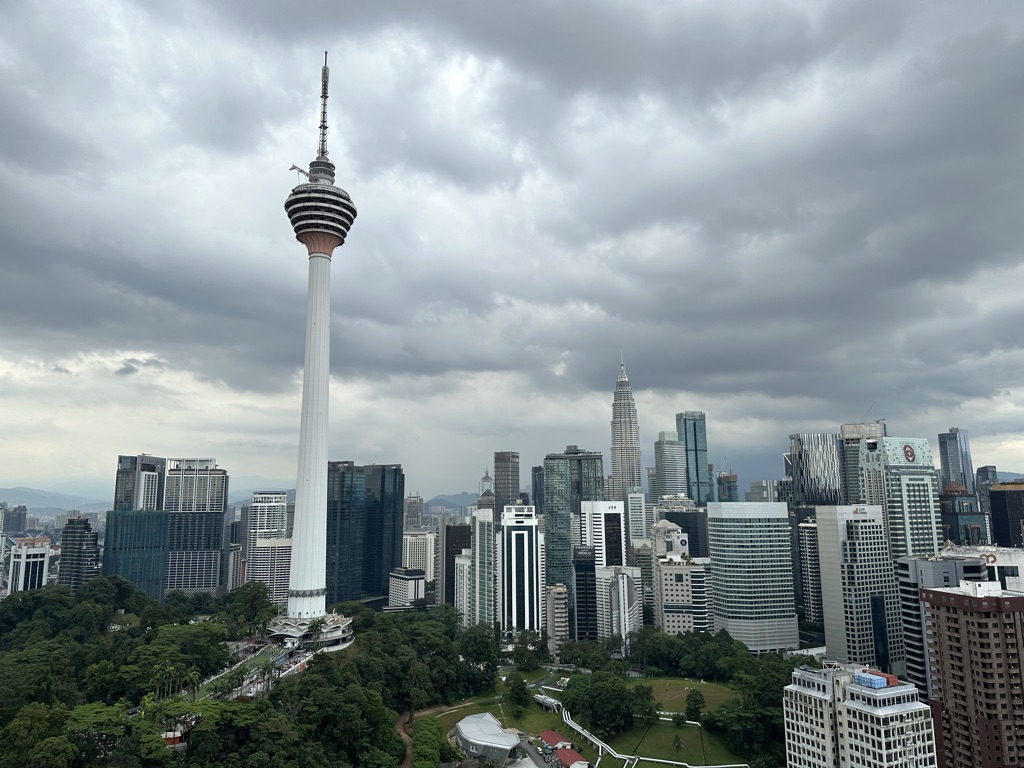 Even though I hadn’t pre booked a ticket, I could happily walk up to the counter or to the self service ticket machine and get a ticket for immediate entry. A ticket for the Observation Deck and Sky Deck is 60RM.

Fortunately there was no queue for the lift after buying my ticket, and I can’t remember there ever being a large queue either all the times I have been up. However, as is the case, when I returned to the bottom, I saw a large queue for the first time as a school group was heading up.

Unlike the Petronas Towers, there’s actually a variety of options at the top of the KL Tower.

The first stop you’ll get to at the top of the KL Tower on a regular ticket is the Observation Deck. From here, you get a true 360 degree view of Kuala Lumpur. The large floor to ceiling glass windows allow you to see out clearly across the city. On the inside walls are various diagrams, information posts and tourist shops. If you do decide to go at night time, be aware that the glare and reflections from the glass can make it harder to see and almost impossible to get good photos.

Even higher than the Observation Deck is the Sky Deck, an outdoor area at the very top of the bulbous top of the tower. Again this has near 360 degree views over the entirety of Kuala Lumpur without a barrier of windows between you at 300m above the ground. Whilst not technically as high from ground level as the Petronas Towers, because the KL Tower is built on a hill, and provides an unobstructed view around you, this makes it feel like you are actually higher up in a very strange way. 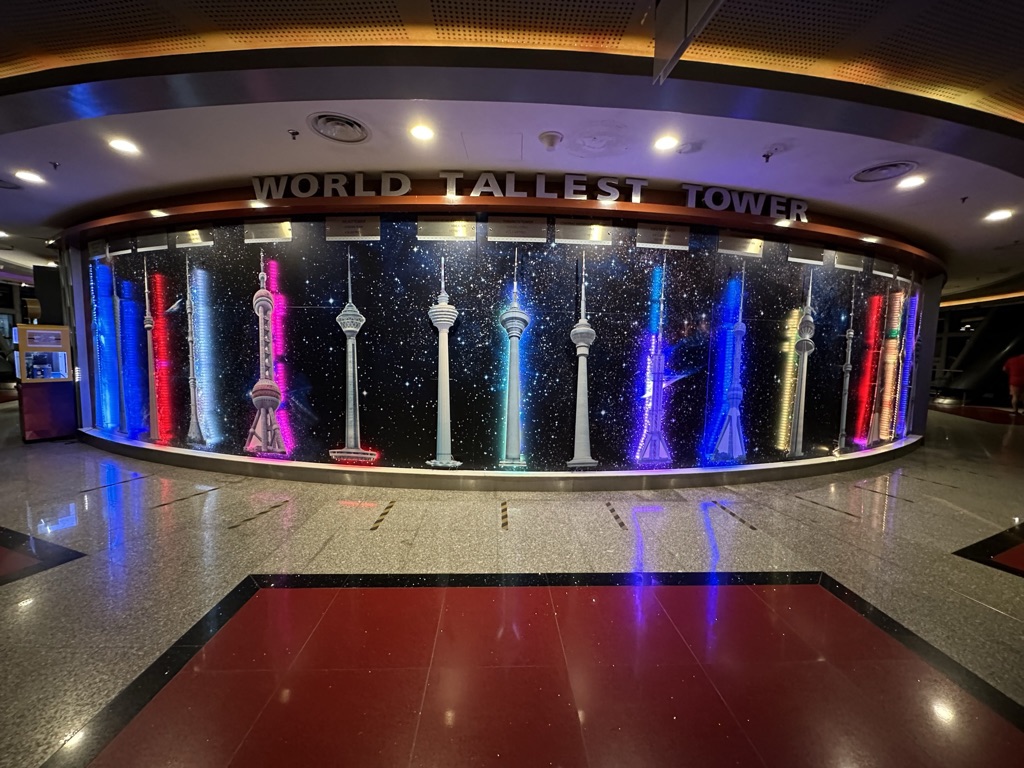 If you want a meal at the top the it’s best to book in advance at Atmosphere360, the revolving restaurant at the top of the KL Tower. There is a small surcharge if you want to guarantee a window seat and for special occasions which they cater for. It is recommended to book at least one week in advance. They offer three set times for dining:

For only 88RM for the Hi-Tea, this is an excellent value option to go to the top of the tower, and enjoy something to eat in a revolving restaurant! It was actually the option I chose the first time I went in 2010!

After travelling to Kuala Lumpur many times and going up both the Petronas Twins Towers and the KL Tower, I can say that the KL Tower is the better option for visitors wanting to get the best bang for their buck and to have the best views over Kuala Lumpur.

The extended visiting hours and full 360 degree views on both levels of the tower make it a much better option. And for those that like the fancy choice, book dinner at the Atmosphere 360 restaurant in advance.

But with both options being relatively affordable and within walking distance of each other, another option is to head up both. Try out the Petronas Towers during the day and the KL Tower in the evening to make up your own mind!