I’ll be honest, I had never heard of Timisoara until recently.

I have been to a lot of places around the world and just have that useless knowledge sitting there about so many places. Romania, I had heard of, Bucharest and a few other cities as well.

I think I discovered it by searching for cheap AirBnB’s and then expanding the search for an entire half continent. That was how I had found Saranda in Albania. I vaguely remember reading one blog post about Timisoara, so I knew there was something to do there, but I couldn’t remember what.

But still, that seed had been planted, and then the roots start to sprout, and when that happens I tend to just go ahead and book it. Timisoara was now booked and I didn’t have a clue what to do there. Would I even like it? Are small cities in Romania any good? I was about to find out.

I arrived into Timisoara late on a Saturday night, on a bus from Zagreb via Budapest. The bus station and the route into the city didn’t seem much to write about. I took a Bolt taxi to my accommodation, an AirBnB apartment right in the city centre. I got out the taxi on a dark side street, the sun long since set. My friend had arrived a few hours earlier so knew what to expect. “I know this doesn’t look like much but walk for a minute with me to see this.”

The last thing I wanted after an almost 13 hour journey was to walk a bit further, I just wanted to dump my bag in the room, shower and go to sleep. But reluctantly I agreed.

At the end of the road was a large square, one of three in the city. To my left was what I can only describe as a Disney like castle. The square was tastefully lit up with colourful flowers dancing in the lights in the middle. At the other end, a few hundred metres away, was a classic Eastern European opera house.

Wow. I had been here about 30 seconds, that’s all the walk was from the apartment, and I was already blown away. It was one of the most beautiful settings I had seen.

Over the following two weeks, my love for Timisoara didn’t diminish, it grew with every turn down every street. I discovered the other squares in the city, Union Square, Liberty Square and Victory Square, and the colourful laneways that joined them all up. Buildings had been painted pastel colours to brighten the mood. At certain times of day, the sun hit them at the right angle to dampen their glow but not their beauty.

I discovered the parks that surrounded the city. Anton Scudier Central Park, formerly called Stalin Park, with statues to communist leaders, to great Romanians of past and another with a tasteful fountain. The youth culture of the vibrant city was evident with street art and skate parks. At night, small corners were taken over with students setting up speakers and dancing.

Past the parks to the south, was the Bega River, a feature that made the town grow with trade in previous centuries, but now used as a place to be enjoyed. The path led along the river from the industrial areas outside the city, through parks and grassy areas that now have riverside bars where it would be criminal not to stop and enjoy the scenery, ambiance and beauty. The pavement was shared with a bike lane and a pedestrian lane making outdoor activity along the river something to be enjoyed easily that to be searched for.

But even with all this, I couldn’t take my eyes off of the castle at the end of my street, or the Orthodox Metropolitan Cathedral, to give it the official name. It had an allure, a magic that just made me want to look at it from wherever I saw it in the city.

I had never heard of Timisoara before I went there. I don’t know anyone else that knows of it either. And right now I want to keep it that way so that I get to live this fairytale again.

Why you should visit Timisoara

In 2023, Timișoara will be a European Capital of Culture. This means that there will be countless events around the city.

When I was there in autumn of 2022, there were still plenty of events on, a food festival, a wine festival and a Hungarian festival showcasing the best offerings of a country that has historic ties to the city and a little over 60km away.

Getting there and away

Timișoara haș an internațional airport located 20 minutes outside the city. There are direct flights from there to Bucharest, London Luton with Wizz Air and various other cities across Europe.

There is also a train station with connections across Romania. However, if you are staying near the train station, don’t expect fairytale views straight away. The train station is an old building built in the brutalist socialist style from Romanias communist days. The area around it isn’t much nicer.

Flixbus also has connections to Timisoara from as far away as Prague. Sofia, Budapest and Vienna can all be reached via a direct bus or countless other destinations via connections of local buses.

Top 5 things to see in Timisoara

1. Walk around the main squares

These really are beautiful and each one slightly different in its own way. The main Union Square is vast with a grassy centre and house the art museum, a church and a selection of restaurants to be enjoyed. The second, Liberty Square, doesn’t have any grand allure but is the site of some of the festivals. And the most southern, Victory Square, has a grand opera house at one end and the cathedral at the other. 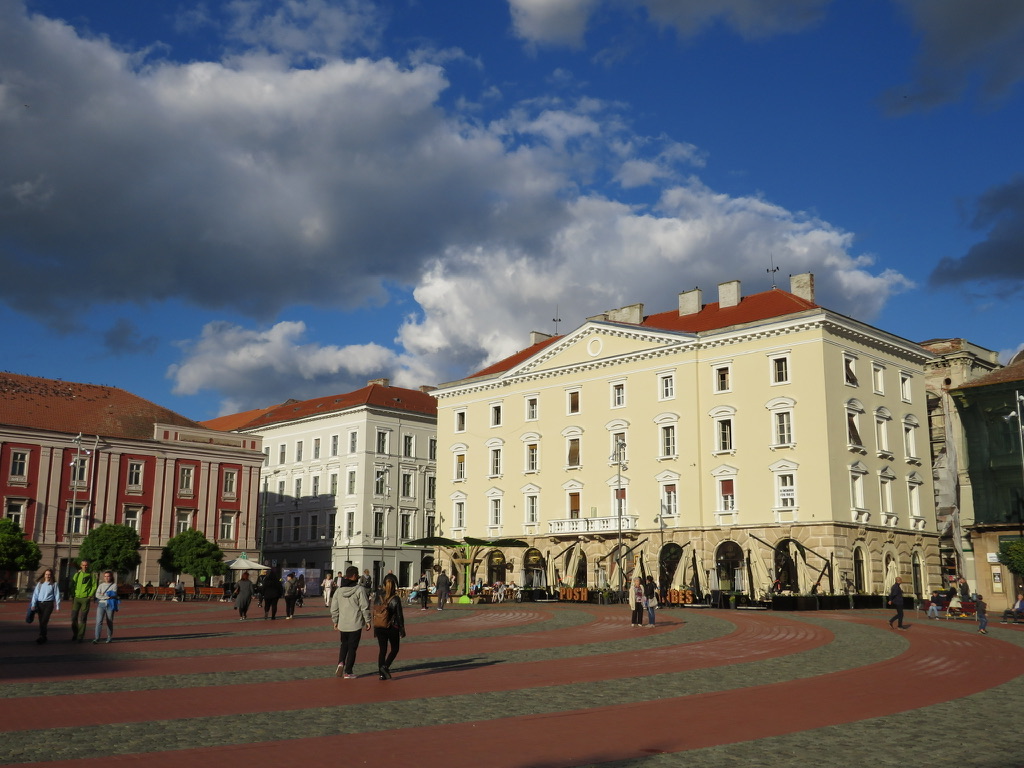 The communist museum to the south of the city is a 15 minute walk from Victory Square. Getting out to the suburbs give you a real taste of what the town has to offer. You get to the museum by going through what looks like somebody’s front garden to the back of their house. A small bar and coffee shop is there and the actual museum is downstairs. Ask at the bar if you need further directions. 15-20 minutes is enough time to spend at the communist museum, but the bar and walk make it into an activity lasting a couple of hours. Entrance fee is by donation.

The centre of Timisoara is surrounded by parks that also line the river. On a warm summers day, it would be criminal to not walk through them, watching locals walk hand in hand, sipping espresso on the river bank or at one of the many festivals that frequently pop up in the town.

The Orthodox Metropolitan Cathedral is one of the most beautiful churches I’ve seen. The colourful tiled roof means it can be seen from all over the city. Inside is also beautifully decorated with gold coverings on a lot of the ceiling. A working Orthodox cathedral, there are regularly church services and even weddings taking place halting the traffic on the main road outside, a rare sight to behold these days.

For a small city, the maing squares host an abundance of food and drink offerings. Whether for a quiet coffee, hearty lunch or fancy dinner, you’ll find something for you in Timisoara.

Top restaurant and bars in Timisoara.

A great brunch or breakfast option is Bruck Cafe in Union Square, the eggs benedict was exactly what I needed.

For a quick dinner of a beer and burger, you can’t go wrong with E10 in the north of the city. For something a little nicer, POSH in a corner of Liberty Square may be of note especially their traditional dessert of papnasi, a type of fried dough covered in cream and berries!

At the end of the night, Storia is a place to join locals for a few cocktails and dance until the early hours.

There are plenty of phone shops in Timisoara that you can use to get a local SIM card, prices start at €5 for 5GB of data with Orange.

There are a few gyms in town, if you are looking for one that provides optimum flexibility as well as being a high quality, check out the gym underneath the Continental Hotel. That has a variety of membership options from daily, weekly, fortnightly and monthly.

As a young city with a big student and tech savvy population, unsurprisingly there are a few coworking spaces around. Although not a major destination for western digital nomads, there were plenty of locals in the cowering space I attended. DevPlant is close to the continental hotel, in the centre of town and offers daily as well as monthly rates. Pets are welcome and free tea and coffee are provided along with comfy office style chairs in a green, open plan layout. I can highly recommend.

Romania uses the two pronged European style plugs. The city centre is entirely walkable but Bolt and Uber are available as well as a local bus and tram network. There are also a few shopping centres surrounding the city centre with western brand names such as H&M and Zara if you do need to stock up on anything. Don’t expect massive discounts though.

English is widely spoken by the young population and I never had any trouble with anyone not being able to speak it. As always, its best to learn a few words of the local language, being a Latin language, Romanian is actually pretty easy to understand for anyone that has some basic Italian or Spanish.

The local currency is Romanian Lei with a current exchange rate of 5.8 Lei to £1. Card is accepted almost everywhere however I always carried some cash with me just in case and only had to use it at one market stall. If you are looking for a travel card, I highly recommend using Wise which can be found in this link. 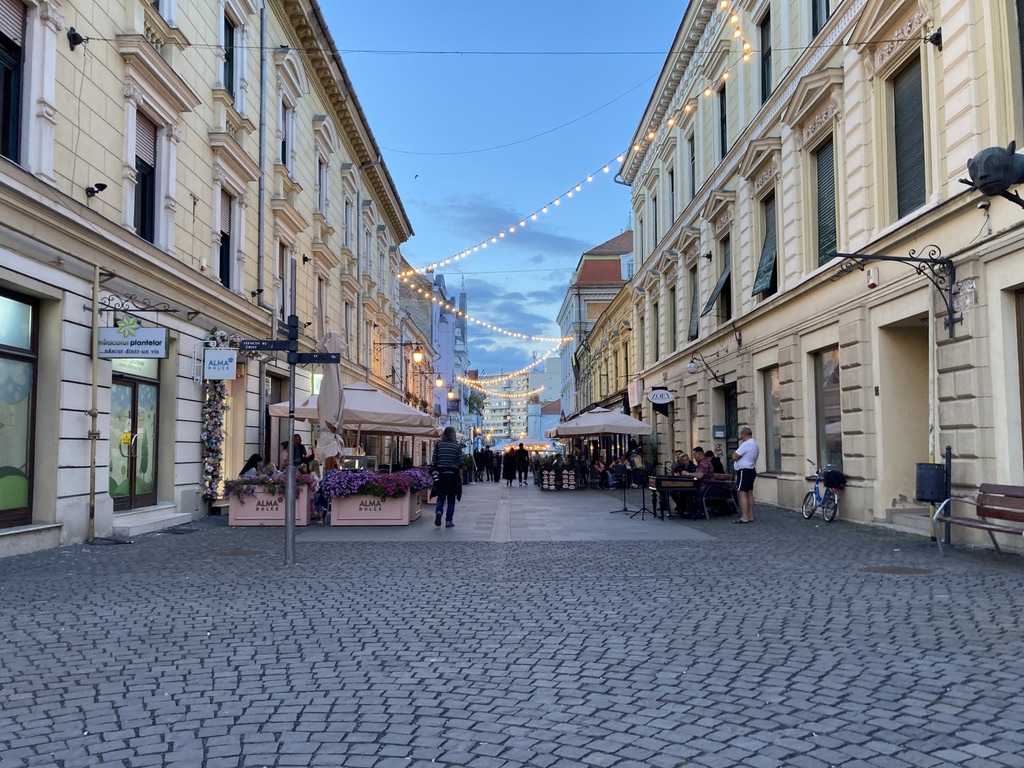 Timișoara is a city that many have never heard of but I don’t think it will stay this way for long. Becoming European capital of culture will put it on the tourist trail and when the beauty is out, people from far and wide will flock to Timisoara to see its laid back vibe, friendly people and large town squares. The highlight for me was cathedral. When you go there, I hope you’ll be as blown away by it as I was.

How to Hike to the Lakes from Bansko, Bulgaria