Before I travelled to Oman, the country in the far corner of the Arabian Peninsular had been on my radar for a long time. I had heard it was the most traditional country in the Middle East as it hadn’t been taken over by the extreme wealth such as in the UAE, was easy to get into unlike Saudi Arabia, and was once of the safest countries in the region.

After heading to Abu Dhabi, I realised that Oman was just a short flight away so I decided to take the trip. But what I still didn’t know was, what is there to do in Oman?

After spending a month in the country, basing myself in Muscat and exploring the rest of the country with a hire car, I have come up with a list of the things you can’t miss when you visit Oman as well as some Oman travel tips at the bottom.

Things to do in Muscat

Muscat will more than likely be the starting point for your trip to Oman. Muscat international airport has links all across the middle east as well as to Europe and Asia. Some capital cities are purely jumping off points to get to see the rest of the countries but it is definitely worth spending a few days exploring Muscat and getting to know it better.

Unlike other cities, there isn’t one main central hub but rather a city that is spread out along the coast in low level white wash buildings with only the minarets of the mosques providing anything that could resemble a skyscraper.

If it has grand in the title you expect big things but after heading there you won’t be disappointed and is definitely the best thing to see in Muscat. Built in the 1990’s, and finally opened in 2001, this is the largest mosque in the country. It had many more records until the Sheihk Zayed Mosque in Abu Dhabi opened, but that doesn’t mean it’s a reason to skip it. Make sure you go between 8-11am as it is only open to worshippers outside of these times.

Like in most countries, I like to go to the National Museum as it often gives the best over view to the country you’re in. The one in Oman is located near Mutrah in the east of the city and has a variety of collections explaining Oman’s history as being at the focal point of trade in the Indian Ocean, how their tribal system worked and the influence of Islam. It costs 5OMR (they only accept card) and expect to spend no more than 2 hours.

As you walk out of the National Museum, keep walking in a straight line to see the beautiful Al Alam palace. One of the six homes of the Sultan of Oman, this royal residence is still used for official state visits and where heads of state and royalty stay during their visits to Oman. You can’t tour the grounds or go inside but it is still an impressive building to view from the outside.

The Mutrah Corniche is a must see in Muscat. Start with visiting Mutrah Fort, a Portuguese era fort with beautiful view over the rest of the corniche and bay. After walking along the Corniche, head into the souq to visit one of the oldest souqs in Oman and one that is still lively with traditional goods today. If you’re after traditional Omani food, I highly recommend visiting Bait Al Luban, a restaurant I stumbled across but one which I have now seen on plenty of other peoples blogs and itineraries.

Things to do in Oman

Crossing over the mountains from Muscat and to the rest of Oman takes you to a lot of smaller towns, some that have been inhabited for hundreds of years and are still very traditional.

Nizwa is one of the oldest cities in Oman. One of its highlights is its fort which was built in the 17th century and the most visited tourist destination in Oman. Behind the fort is the garden of date palms and traditional irrigation (or Aflaj) that has been there for centuries. Once you’ve done with that, the traditional souq is right next door where you can find traditional goods mixed with the modern. If you’re lucky enough to visit Nizwa on a Friday the traditional Goat Market is definitely worth a stop.

Bahla is a town close to Nizwa that contains the 13th Century Bahla fort. The fort is made of traditional mud but still one of the largest in the region. It’s a UNESCO world heritage site however it is let down by the lack of information inside. Prepare to get lost as you walk through the maze of corridors and rooms all flanked by the mud walls which have been standing for centuries. There is no single best way to go around due to the lack of info, so be prepared to keep climbing and walking until you hit a dead end.

Jebel Shams is the highest mountain in Oman. It’s often called the Grand Canyon of Oman or the Grand Canyon of Arabia due to the massive gash carved into the rock shows. If he gets too much for you this is the place to come as in winter it often gets to freezing degrees. You need a 4WD to visit Jebel Shams if you are going by yourself. Alternatively, you can take a tour from Muscat, Nizwa or Bahla.

South East of Muscat along the coast

The inland highway makes it feel like you are driving through some of the remotest places on the planet. You may have to stop as camels walk along the road or goats try to make a crafty escape.

But the coastal highway is one of the most beautiful roads I have ever driven. The ocean on one side with towering mountains on the other make the villages dotted along the route seem like a speck. There is also a lot more to stop and see if you are travelling this route.

If possible, I’d recommend making a loop so that you get to see both sides of the Al Hajar mountain range. The furthest point in the eastern corner of the Arabian peninsula is Al Hadd.

Al Hadd is right down and the bottom corner of the Arabian peninsula and it really does have that “end of the world” vibe going on. There isn’t much there however it is important as a place where green sea turtles come to lay the eggs. Very few tourists make it to this corner of the country so you’ll have a large beach to yourself. This is one of the most authentic small towns I visited on my trip.

There’s no other tourists around in the very small fishing village but nearby at the Raz Al Jinz turtle reserve you can pay for tours to see the turtles to come in and lay their eggs in the sand. Overnight during peak season up to 20,000 turtles lay their eggs here every night!

Sur is a small town about 45 minutes drive from Al Hadd. In past centuries it was the place where the dhows were made to sail around the Indian Ocean, Arabian Peninsula and all the way down to East Africa for trade creating the wealth that grew Oman. Now they have a strong Maritime Museum, a dhow factory and lighthouse which can all be seen in the town.

Wadi Shab is a highlight of most peoples trip to Oman. The natural water flows down a canyon, creating small pools of cool fresh water to swim in. To get there, you take a short a boat over the large pool that appeared under the bridge of the highway. You pay 1 OMR to cross the river in just 30 seconds. 45 minutes of hiking through the valleys, feeling like you’re in Indiana Jone, you will get to some of the pools. In the pools you can relax in the shallow freshwater or for the more adventurous there’s the possibility to swim a bit further to a natural waterfall inside one of the caves. 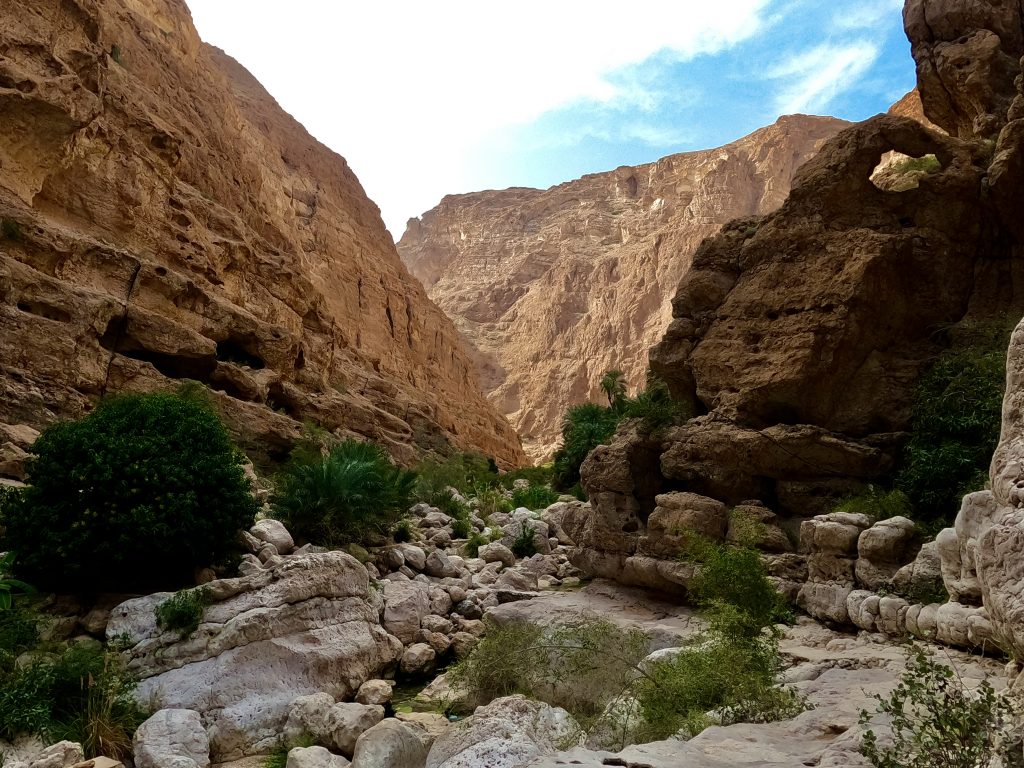 Bimmah sinkhole it’s just an hour south of Muscat. It was formed when the surface layer of rock collapsed as the underlying rock eroded. The locals believe the area is a well formed by a meteorite.

However it was formed, a beautiful park area now surrounds the sinkhole where locals come to relax and enjoy the freshwater. Like much of Oman it is designed for locals and tourists are lucky enough to visit as well.

If you’re really looking for something off the tourist trail, see if you can catch camel racing in Maydan Al Bashair.

If you’re lucky enough to be there at the right time of year, an hour drive from Nizwa is a camel racing festival near the town of Adam. There’s little going on in Adam, just the last major town for over 800 km until Salalah so it isn’t worth a trip otherwise. I couldn’t find much information online just this one website (in Arabic) and an Instagram account that didn’t translate much into English.

Unfortunately I arrived on a day in March when there were only presentations and no racing which I was disappointed about. Hopefully you’ll have more luck that me!

Oman is an incredible country with so much to see and do. Along with this list there are plenty of other Wadi’s on the coast, hikes to be done in the mountains and I haven’y even touched on the beautiful city of Salalah in the south west of the country.

Is Oman on your list of places to go? Before you book, check out these Oman travel tips.

What To See and Do in Manama, Bahrain (2022 Travel Guide)