Travelling to Ukraine in 2021: What you need to know

I recently travelled to Ukraine from London for what is my first major trip since the pandemic started. Since March 2020 I travelled round New Zealand when they didn’t have COVID, I returned from New Zealand to London and have been to Porto for one day on a chartered flight for a football match. But now this was back to how I like it. Travelling by myself without much of a plan.

The first question people asked when I told them when I was going to Kiev was, “why?”

Being from the UK (which as of August 2021 has a high rate of the delta variant) actually makes it quite difficult to get in some countries without either a quarantine or many PCR tests. I am double vaccinated but a lot of western Europe countries still need a quarantine (Italy and Germany) or a PCR test (France) before entry.

Ukraine only requires evidence of my double vaccine and insurance against Covid which can be bought on their tourism website. Both of these were checked at check in and when I went through passport control. I didn’t need to spend any money on a PCR test which was a big decision in choosing Ukraine.

Ukraine is also visa free for those with a British passport (and many other nationalities). I got 90 days when I arrived at the border even though I wouldn’t be staying that long. I can stay for up to 90 days in any 180 day period, which is pretty similar to the rest of Europe.

Another reason, and probably the most honest, is that I had a conversation with a friend about Chernobyl. He said he always wanted to go. So I said we should. We nearly booked a flight that night but he played the sensible person and waited until he had the time off work confirmed. I was less sensible and booked a flight a few days later. 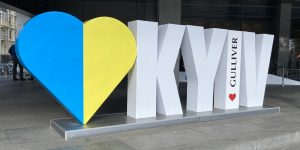 Cost of Living in Kiev

Another reason I chose Kiev is due to it’s low cost of living. I knew it would be a cheap destination when I searched on Air BnB and could get a studio apartment for around £400 per month. Food and activities are also affordable compared to western Europe and London in particular.

Flying from London to Kiev has many options. I flew with Ukrainian International Airlines from Heathrow. There were also a few budget airlines that flew from other London Airports to Kiev. As mentioned, the check in process was easy and the flight relatively short at just over 3 hours. Kiev Boryspil airport is nothing to shout about but nothing to complain about either. The immigration queue wasn’t too bad and the only questions that were asked was to see my insurance and vaccine confirmation as they stamped my passport. If you land at Terminal D there is are plenty of rental car companies and a kiosk selling SIM cards are soon as you walk through customs.

Getting from Boryspol airport to Kiev city centre

There are a lot of options from Kiev Boryspol airport to Kiev city centre. The obvious is a taxi which you will get hawked for as soon as you leave the terminal. The other option is the SkyBus which is runs every 10-45 minutes (depending on the time of day) and takes 50 minutes to the city centre. I got the train from the airport station for 80UAH. However once I had bought my ticket, I realised that the next train was over an hour away! I bit the bullet and waited, changing at Vydubychi station to get the Metro to my Air BnB. I have since learned that the train schedule is erratic to say the least so maybe check the times before buying a ticket and jump on the bus if it’s going to be a while.

You can get a Metro card for 50UAH and then top it up with the number of journeys you want. Journeys usually cost 8UAH but the more you prepay, the cheaper it becomes. I got a card and 20 journeys for 198UAH which should be more than plenty for 2 weeks in Kiev.

What to see and do in Kiev

Apart from Chernobyl, there is still plenty to see in Kiev. St Sophia’s Cathedral is a UNESCO world heritage site and well worth a look. There are plenty of other churches and cathedrals around the city. Even if you are bored of churches in Western Europe, the ones in Ukraine are Eastern Orthodox style so a lot different and stunning in their own way.

If you do find old churches getting to you, Kiev is a rapidly modernising city with coffeshops on every corners, parks galore and a growing food and drink seen. There are also some nice nature spots, an impressive sports complex and soviet era monuments to visit. Taking the metro is the easiest option but walking between the major sites is also doable.

You May Also Like: Top 10 Crazy Things To Do In Ukraine

In reality, Ukraine is an easy and attractive destination for travellers from the UK. The Ukraine is an amber list country which makes return easy if you are double vaccinated. It is cheap with plenty to see and do and very easy to get around. Travel to Ukraine is probably one of the easiest places to go to currently.