Visiting Nizwa Goat Market (How To Visit In 2023)

Nizwa is a small town a few hours inland from Muscat and most famous for Nizwa Fort, the most visited tourist attraction in Oman.

Whilst I was researching my trip to Nizwa, I heard about a fascinating thing that happens only once per week. But all I could find was one very old blog post on it. So here is an updated account on how to visit Nizwa Goat market.

Nizwa is 156km from Muscat, or just over a 90min drive depending on where you are in the city. As it starts early, I would recommend travelling the day before and staying overnight in Nizwa.

The easiest way of getting to Nizwa from Muscat would be to drive yourself. Hire cars are readily available from the airport costing from 20 OMR per day. There are cheaper deals with local businesses in the city centre but these often have a kilometre limit. Many international companies at the airport come with unlimited km’s.

There are buses from Ruwi bus station to Nizwa but only one per day. For those with more time than money, this is an option. I have heard that you will be dropped on the main highway and then need to get a taxi to the goat market. You will have to leave the day before and stay the night if travelling with pubic transport. For the latest updates, check the Mwasalat website.

People start arriving from around 6am. By the time I arrived just before 7, the car parks around the souk was already busy. I had seen cars go past me on the way in with goats tied up in the back. Finding a parking space near the goat market at this time was proving to be difficult so I parked the other side of Nizwa Fort. It was a lot less busy and easier to park which reduced the chance of a scratched hire car!

The goat market is actually at one end of Nizwa Souk. I walked around the outside of the market, smelling the coffee and BBQ’s of locals selling their trade. I highly recommend a stop for coffee if you have time, Omani coffee is amazing! When the smell of coffee wears off and the smell of farm gets stronger, you know you’re getting close. Alternatively, you can walk through the souk where there is a sign in English. 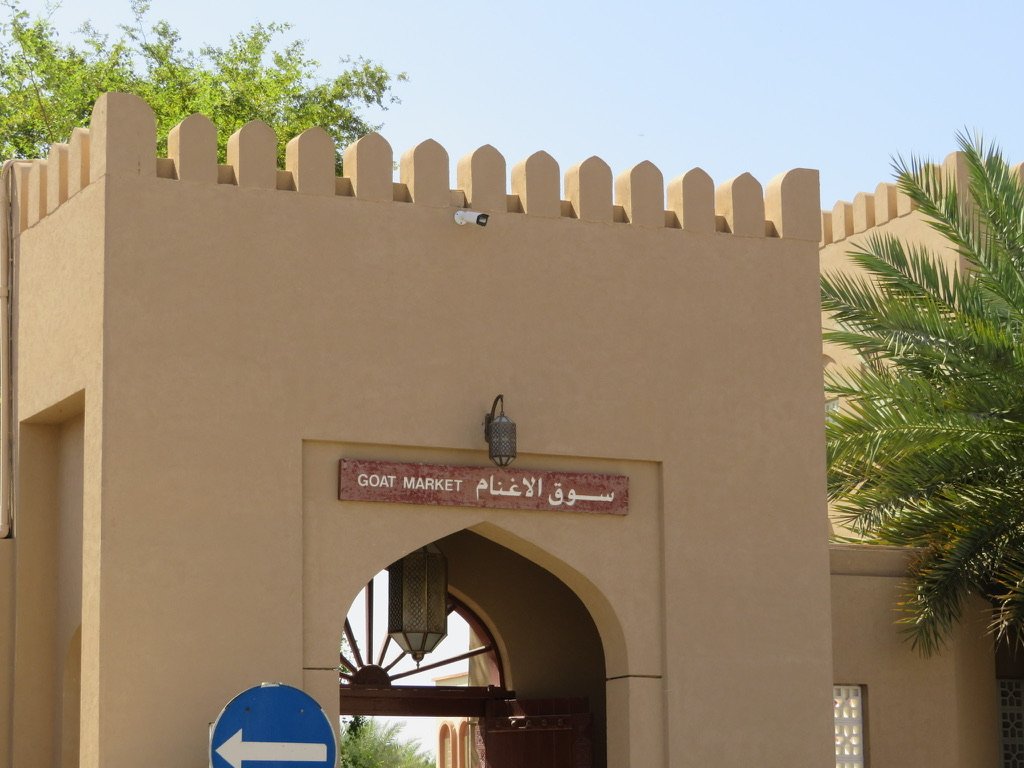 At first, all the goats are tied up to various posts around the outside. A covered area in the middle with steps giving a view to all the buyers that want to see. By the time I arrived it was already a hubbub of activity with a few hundred people standings around. There were a few tourists there which was actually more than I expected.

Just after 7.30am there was a lot of yelling and people made room in the circle. One by one, men walked around followed closely with a goat on a leash. More yelling happened as the men advertised the goats, others sitting in the middle would call them over for a closer look. A closer look normally consisted of a grab of the back (I guess to see the meat potential), a look at the teeth (to see the general health of the animal) and a soft squeeze of the balls (you can work that out yourself).

After a while there was a near continuous stream of men with goats, sometimes carrying the smaller ones. Once a deal was agreed, the exchange of cash was done just outside the huddle of onlookers. From the few people I asked, a small goat cost between 45-50OMR (£80-£100) although I never asked a buyer of one of the older goats.

As a spectacle, it was fascinating to see an animal auction, the likes of which would have been happening in a place like Nizwa for centuries. Having a local explain the process better would have improved the experience but most locals are happy to answer questions. Be warned that less English is spoken here than many other places in Oman. 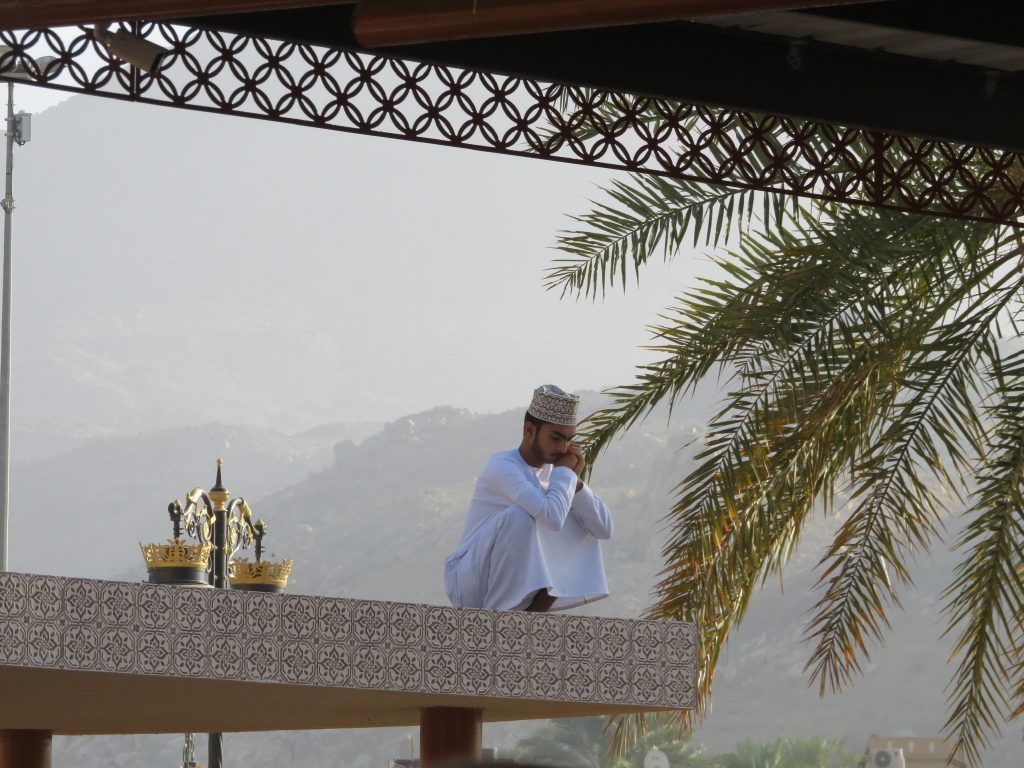 All of the buyers and sellers are men with some of the youngest being early teens and the oldest looking like he should have retired years ago. There were women sitting around the outside of the market but none partaking in the purchasing. Western women, who were all appropriately dressed, were in attendance in the inner circle of the market however. 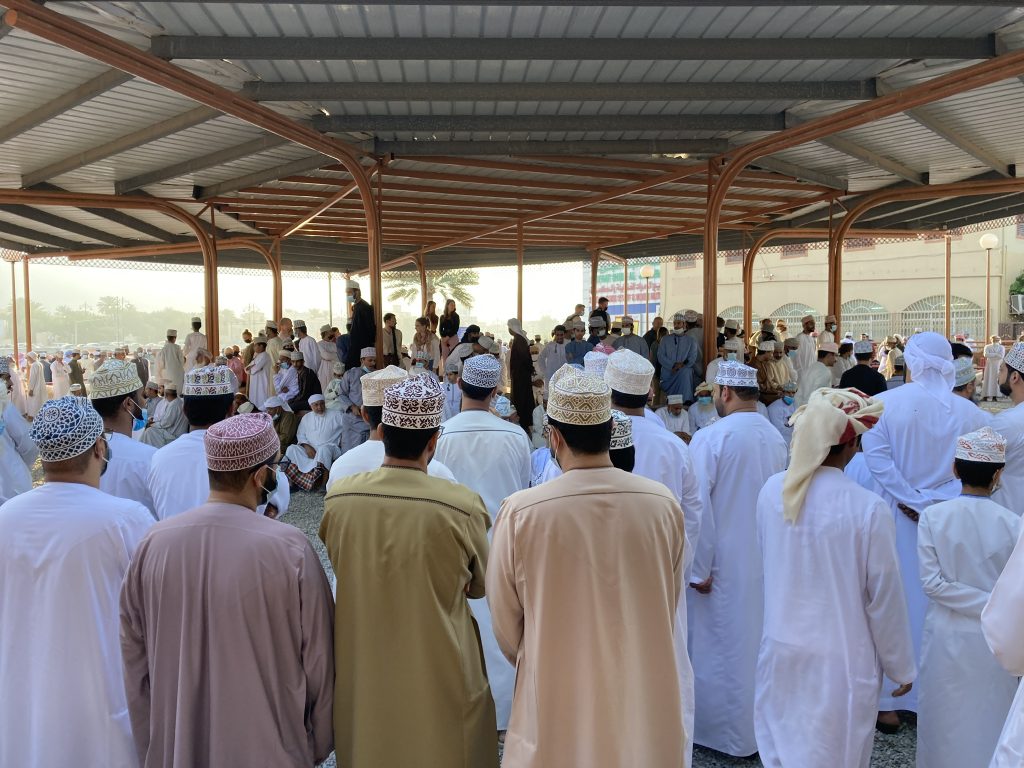 You can stay for as long as you like, until all the goats are sold. I stayed for an hour and it was still a hive of activity despite the number of goats around the market dwindling. After visiting the souk and Nizwa Fort, I walked back past the market around 10.30 and the place was empty, except a couple of goats that may have been left behind or for the owner to collect later.

If you can coincide your visit to Nizwa with a Friday morning, I highly recommend visiting the Nizwa Goat Market. It is a truely authentic experience that will allow you a glimpse into the life of rural Omani’s.

Looking to travel around the rest of Oman? Check out: Top 12 Things to do in Muscat and Oman